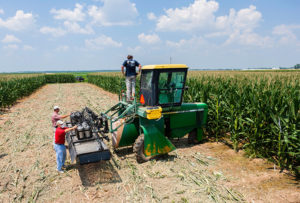 A new sprayable bioplastic — made of cornstarch and other natural ingredients — offers a potentially effective method for delivering beneficial microbes to fight aflatoxin and other agricultural pathogens and pests.

Aflatoxin is a highly toxic substance produced by many species of Aspergillus fungi. Annual losses are estimated at more than $200 million for corn. The U.S. Food and Drug Administration prohibits the sale of corn containing more than 20 parts per billion of aflatoxin for the use of human consumption or animal feed.

But not all Aspergillus fungi produce aflatoxins; some strains are considered beneficial. U.S. Department of Agriculture Agricultural Research Service scientists are using helpful Aspergillus species to prevent harmful ones from contaminating crops like corn.

In earlier research, plant pathologist Hamed Abbas, with ARS’s Biological Control of Pests Research Unit in Stoneville, Mississippi, and other scientists encapsulated a nontoxic, beneficial strain of Aspergillus in granules of bioplastic — a biodegradable plastic derived from organic substances rather than petroleum.

The granules worked well in reducing aflatoxin when spread onto soil in the furrows between waist-high corn plants. However, growers needed a better method of delivering the beneficial Aspergillus.

Recently, Abbas and collaborator Cesare Accinelli, from the University of Bologna, Italy, developed a sprayable biodegradable formulation, which is easier to apply. In studies, aflatoxin contamination of corn was reduced 97% using this system.

“With the spray method, we don’t have to put the beneficial fungus or spore on a granule of bioplastic,” Abbas says. “We melt the bioplastic into a liquid, mix in the biological control agent — a nontoxic, beneficial Aspergillus in this case — and spray it on the plants or coat the seeds with it.”

According to the researchers, biological control is the most effective way thus far of reducing aflatoxin contamination.

“The bioplastic is made of cornstarch, which is sticky,” he says. “There’s no need to add other materials to make it stick to the plant or seed. Also, it provides nutrition for the beneficial microbes because cornstarch is rich in carbon and energy.”

Another advantage of the bioplastic is that it can be delivered in one application in any form: granule, liquid, spray or seed coating, Abbas adds. It is inexpensive, has a long shelf life and is easy to apply.

This technology has other potential commercial applications, Abbas notes. In experiments, other microbial biocontrol agents have significantly reduced damage caused by the European corn borer in corn and the tarnished plant bug in cotton.