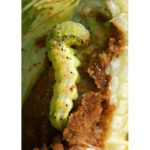 • By Pat Porter • This week, the Environmental Protection Agency released a draft plan that essentially overhauls many of the regulations around insect resistance management in Bt crops grown in the Cotton Belt. There are many major changes proposed, one of which is that field failures are presumed to be cases of “practical resistance” if certain criteria are met ... END_OF_DOCUMENT_TOKEN_TO_BE_REPLACED 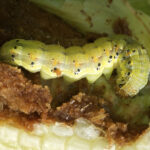 • By Pat Porter • Dr. Suhas Vyavhare and I are conducting a very detailed experiment this year on some aspects of Bt corn. Part of the experiment involves putting 120 emergence cages on the ground under corn after corn earworm larvae (cotton bollworms) have left the corn ears and entered the soil for pupation. This lets us determine the ... END_OF_DOCUMENT_TOKEN_TO_BE_REPLACED 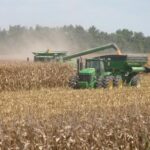 • By Glenn Studebaker • Corn harvest is underway, and some growers will be storing their grain on farm in bins for an extended period of time. Stored grain pests can cause significant losses if left unchecked. There is an entire complex of insects that can infest grain stored in bins. There are several weevils and other beetles as well ... END_OF_DOCUMENT_TOKEN_TO_BE_REPLACED 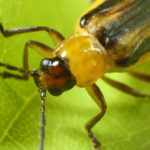 Nicknamed the “billion-dollar beetle” for its enormous economic costs to growers in the United States each year, the western corn rootworm is one of the most devastating pests farmers face. “They are quite insidious. They’re in the soil, gnawing away at the roots and cutting off the terminal ends of the roots – the lifeblood of corn,” said Bruce Tabashnik, ... END_OF_DOCUMENT_TOKEN_TO_BE_REPLACED

Know when to safely terminate irrigation 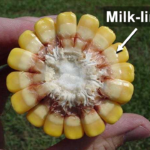 • By Erick Larson • We have a wide range of corn maturity due to sporadic planting opportunities this spring, but much will be denting and filling kernel size and weight soon. Assuming the crop is already made can quickly erode potential profitability, as about 50% of kernel weight is filled after dent. Thus, corn management is still important. Irrigation ... END_OF_DOCUMENT_TOKEN_TO_BE_REPLACED

How to estimate corn yield before harvest 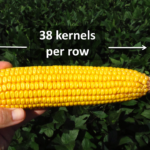 • By Erick Larson • You can estimate corn yield by thoroughly sampling random ears in a field and using a multiplication formula. It will take some effort, knowledge and luck to represent a field, but it can satisfy your desire regarding the upcoming harvest. The issue with any estimate is kernel weight cannot be measured prior to physiological maturity, ... END_OF_DOCUMENT_TOKEN_TO_BE_REPLACED 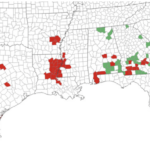 • By Travis Faske and Terry Spurlock • Southern rust was detected last week (July 6) in Arkansas, Jefferson, and Lincoln counties, Arkansas. Disease incidence and severity was low (one leaf on two plants with 30-40 pustules/leaf; Fig. 2) on corn at blister to milk growth stage (R2-R3). The timing is about right for southern rust — for the past ... END_OF_DOCUMENT_TOKEN_TO_BE_REPLACED 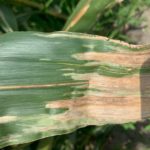 • By De Broughton, Ian Small and Fanny Iriarte • What are the symptoms? In recent weeks, extension agents in various locations across North Florida (primarily in the Northeast) have received calls from growers and consultants about symptoms of rapid decline in corn. Symptoms observed include leaf blight and in general, a wilted, scalded appearance of foliage still in the ... END_OF_DOCUMENT_TOKEN_TO_BE_REPLACED 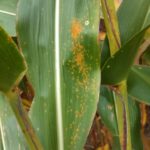 • By Heather Marie Kelly • Relatively low disease has been observed in Tennessee so far. The warmer winters most areas had may have allowed survival of disease inoculum and paired with storms coming from the south could result in more disease development this season. So scouting and correctly identifying diseases are important. Whether a disease will develop and cause ... END_OF_DOCUMENT_TOKEN_TO_BE_REPLACED 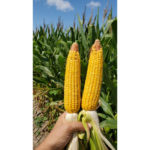 2020 has been a year of many challenges so far, but that didn’t stop our corn hybrid trial from being excellent! With cold nights and sunny days at the beginning of the season, great genetic material, and a fantastic dedication of the University of Florida/Institute of Food and Agriculture Sciences Plant Science Research and Education Unit staff, our corn looks ... END_OF_DOCUMENT_TOKEN_TO_BE_REPLACED