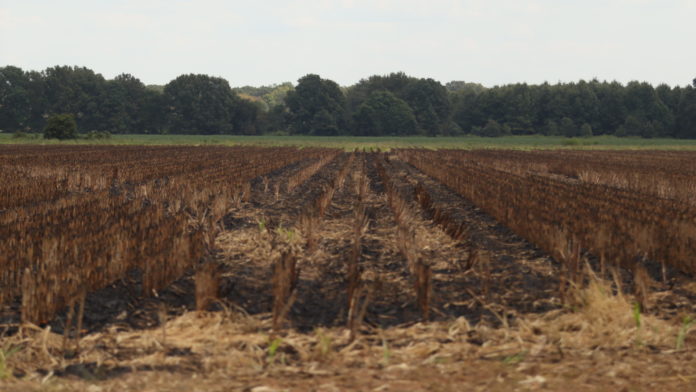 Farmers have several options for managing residue: Fire, flood and tillage, or some combination of the three. Use of each depends on what the production system used in the current season, the weather after harvest and what crop a farmer plans to grow in that field in the following season.

Use of fire in harvested fields in Arkansas is one of several tools farmers can use in managing residue from rice and other crops to prepare for the next season, said Jarrod Hardke, extension rice agronomist for the University of Arkansas System Division of Agriculture.

The practice sometimes gets a lot of attention when conditions shift, sending smoke into residential areas.

“The burning of crop residue is one of many tools farmers can use. It is agronomically sound, but like every field management practice, it carries its own set of pros and cons,” he said. “There’s not one cookie-cutter scenario for managing residue in all situations.”

The problem with stubble

Stubble left in the field after harvest creates a variety of problems for farmers: It can provide cold-weather shelter for crop insect pests and provide harbor for weeds and diseases to strike the following spring.

Farmers have several options for managing residue: Fire, flood and tillage, or some combination of the three. Use of each depends on what the production system used in the current season, the weather after harvest and what crop a farmer plans to grow in that field in the following season.

“Burning can help us minimize some of our weed species and seed that’s viable out there, as well as manage any disease that may be present in the residue in soil and help us suppress some of that,” Hardke said.

Burning the stubble speeds decomposition and the release of nutrients in to the soil.

Getting rid of the residue is especially important when the farmer plans to plant rice again in the same field the following year.

“Rice residue is actually allelopathic to rice, meaning it releases toxins as it breaks down that will make young rice sick,” he said. “If you have a lot of this residue still present next year, when we try to grow the rice again, we can injury or in some cases, kill, seedling rice.”

In drought years, farmers sometimes bale the stubble to sell as forage when livestock producers will pay top dollar for any available forage. Hardke cautioned that growers have sometimes found that the cost of restoring nutrients to that same soil in the spring made the venture ultimately less lucrative.

Hardke said only about 40% of Arkansas rice fields see fire and only in years when conditions are conducive to burning.

What stubble remains after burning is incorporated into the soil for further decomposition, adding nitrogen, sulfur, phosphorus and potassium back to the soil.

As more growers move to row rice, “one big potential bonus that many want to utilize is going back to when they don’t actually have to perform any tillage,” Hardke said. “We can rotate from rice to soybean without having to do any or just some light tillage to recreate water furrows to carry water down the field.

“But we still have to manage that rice, and occasionally soybean residue at the ends of the fields, and being able to incorporate burning is a net benefit,” he said.

Tillage is the practice of plowing stubble into the ground. Without being able to burn, farmers left with large amounts of stubble may be forced to perform “what can be an excessive number of tillage passes that not only have their own emissions, but can decrease soil quality over time,” not to mention adding to the expense of a crop by increasing use of high-priced diesel, Hardke said.

“Holding water on that soil during the winter is not always a positive environmentally but can be good for the field and the residue management,” he said, adding that the downside is that flooding can send loose stubble off the field, dam up ditches, block drainage and cause problems downstream.

“Bothering people in neighboring communities isn’t anyone’s goal,” Hardke said. “Keep in mind, all these farmers and everyone involved in this burning and management, they live right there, too. They’re not interested in putting themselves or their families through the annoyances, either.”

Hardke and other Division of Agriculture experts were involved in a smoke management task force that developed the Arkansas Voluntary Smoke Management Guidelines, available from the Arkansas Department of Agriculture at https://www.agriculture.arkansas.gov/arkansas-voluntary-smoke-management-guidelines/.

“One thing we’ve focused on is public education regarding when the best time to burn is,” Hardke said. In addition to the guideline publication, the Dept. of Agriculture also provides a for growers to report their planned prescribed burns at 1-800-830-8015, and several weather apps have been developed to provide real-time recommendations on the best time to burn on a given day.

Relying on the weather

“Where we run into problems in agriculture is that every single day, we’re at the complete mercy of Mother Nature,” Hardke said. “Anyone who’s ever tried to plan a special event for a specific day knows there’s often a difference between what the forecast is, and what actually happens.”

A change in wind direction or an atmospheric inversion that can cause smoke to linger near to the ground, rather than lifting away — can make for an unpleasant experience in nearby communities.

While incidents of smoky burns affecting nearby communities occasionally grab headlines, Hardke said it’s important to remember that burning takes place in a minority of crop acres throughout the state.

Fire reclamation is part of a natural environmental cycle, he said.

“If we weren’t here farming rice on these lands, and the area still existed in its native prairie form, it would still naturally burn itself off periodically,” Hardke said. “Lightning strikes are a natural part of the ecosystem. Things catch fire, burn off and regrow much healthier than before.”

The Division of Agriculture is conducting research on other methods of managing stubble to help farmers avoid the expense of adding high-priced fertilizer to the soil and improve soil health.

Ryan McGeeney is a communications specialist at the University of Arkansas Division of Agriculture and may be reached at rmcgeeney@uada.edu.