Louisiana farmers rushed to harvest crops ahead of Hurricane Laura 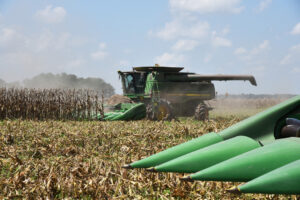 Two combines harvest a corn crop in Avoyelles Parish on the Williams brothers’ farm in 2019. Farmers are working across the state to get their crops harvested before Hurricane Laura hits Louisiana — LSU AgCenter file photos by Bruce Schultz

North Louisiana farmers were rushing to get their corn crop out of the field before Hurricane Laura hit Aug. 27, and so far, the crop looked good.

Laura also has the potential to inflict serious damage to the state’s soybean crop.

Keith Collins, Louisiana State University AgCenter agent in Richland, Franklin and Ouachita parishes, said about half of the corn crop has been harvested in his area.

Yields are good. “We’re going to end up about where we were last year, maybe better, but not a bumper crop,” Collins said.

The average yield appears to be about 185 bushels per acre.

Laura is expected to hit Louisiana near the Texas line as a hurricane and move into north Louisiana and Arkansas as a tropical storm.

Collins is worried about Laura’s wind. “This corn is dry and very susceptible to breakage,” he said.

Wind gusts over 60 mph would cause damage, but even 40 to 45 mph winds would lay the stalks down.

Harvesters can cut corn that has been knocked to the ground, but the process is slowed considerably. “If everything falls right with the rows, they are more apt to get it. If it’s off the ground at all, they can get it,” Collins said.

Bruce Garner, AgCenter agent in West Carroll and Morehouse parishes, said corn yields have been good in his area. With low corn prices, farmers need a high yield to break even. “Yield wise, we’re going to be a bit above average,” he said.

One producer entered a national yield contest with a 248-bushel-per-acre harvest on a small acreage.

Harvest is late this year because of wet conditions that delayed planting. 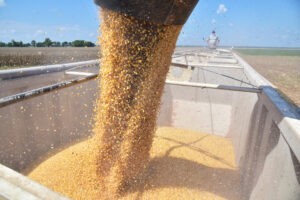 Harvested corn fills a trailer in 2019 in Avoyelles Parish, Louisiana.

A dry spell arrived after most of the corn was in the dent stage. “We just got really good drying conditions,” Garner said.

Farmers have been working nonstop. “My guys are rolling hard to get as much done before this weather,” he said.

To the south, the corn crop is doing well.

“It’s been really good,” said Justin Dufour, AgCenter agent in Avoyelles Parish. “I think a lot of the producers are satisfied.”

The weather cooperated through the growing season.

Yield reports have been good. “We’ve had multiple producers cut above a 200-bushel average,” Dufour said.

Sweet potato harvest has started with encouraging reports, and some farmers are starting to harvest soybeans.

Collins also said the soybean crop looks good in his area, but it could be susceptible to wind damage. “It just depends on the height and how heavy the pod count is,” he said.

But what will happen to soybeans with Laura is difficult to know. “I’m hoping for the best — that we don’t get a lot of lodging,” he said.

Sugarcane producers who use soybeans in rotation have been reporting high yields. “Up until this system, everything has looked really good. Now we’re worried about weathering, lodging and delayed harvest,” Moseley said.

After soybeans mature, it’s unlikely they will be able to rebound if they are knocked down.

Soybeans ready for harvest could be damaged by heavy rain, and quality would suffer, he said. And fields with mature soybeans that are too wet to harvest after Laura are likely to have quality losses also, he said.

Bruce Schultz is assistant communications specialist at the LSU AgCenter. He may be reached at BSchultz@agcenter.lsu.edu