Scotty Raines, who grows peanuts, cotton and other crops, is named Georgia Farmer of the Year 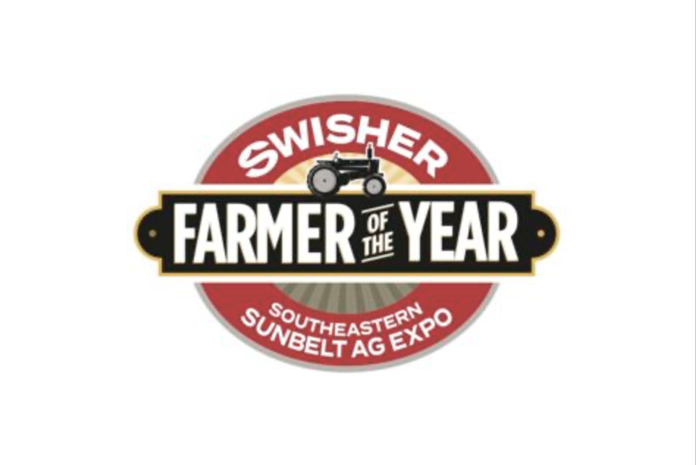 Scotty Raines didn’t grow up on a farm, but his father kept a large garden at home. His mother, a beautician, had a beauty shop behind their house. So Scotty began his agrarian career by selling produce from the garden—tomatoes, squash, cucumbers, and corn—to her customers. He also participated in FFA at Turner High School and, after graduation, became a farm technician with Agratech Seed Research. In 1991, he married Melanie, a girl he’d grown up with, and two years later began farming full-time in partnership with his father-in-law.

Raines said, “I’m very proud of my family. My wife keeps her accounting skills sharp by maintaining the books for three area churches. We are active in First Baptist Church of Tifton. When our oldest daughter, Celie, was in school, she was in the marching band. It was quite a feat because she is hearing impaired. Our second daughter, Christian, is an EMT. She loves helping people, although she battles Lupus and is in pain most of the time. I think this helps her relate to her patients.”

He added, “Her husband, Justin Pate, works full-time on the farm and has a passion for volunteer fireman work. He was just awarded the Turner County Most Responses and Responder of the Year awards. He and Christian have been working on their certification to become foster parents.”

Raines recalled, “My father-in-law and I originally farmed about 500 acres and eventually expanded to 1200 acres. I ventured out on my own to purchase 30 beef cows in 1994. During our partnership we purchased two farms; the remainder of the acres we worked was rented. My wife and mother-in-law were very active in the operation.”

In the spring of 1996, his father-in-law suffered some major health problems, so Raines finished the crop that year. He began farming on his own a year later with 1000 acres that grew over time to 2300 acres, with 1199 acres owned and 1101 acres rented.

For marketing his crops, Raines uses a variety of techniques. In 2001, he purchased 25 percent of Hat Creek Peanut Company, a peanut buying facility and a chemical and seed selling point owned by four larger farmer groups. In 2022, Hat Creek Peanut Company will be entering into the trucking business to further help the owners and other area farmers to handle their commodities more efficiently.”

He commented, “I was confident it would provide us with a more active way to market our peanuts. Hat Creek and I later bought shares in Tifton Quality Peanut, a produced-owned shelling company that’s also grower owned. They shell the nuts and sell directly to companies like Mars Candy. Doing business this way puts us closer to the consumer and retailer in terms of sales. And anytime you can get one step closer to the consumer, I believe you’ve made a step in the right direction.”

In the beginning of his farming career Raines marketed his own cotton through local gins. He remembered, “Since I was so busy on the farm, I wasn’t able to do the best job. Joining Staplcotn, a marketing cooperative, was a better solution. It’s a great time-saving and solid way of doing things. And because we carefully manage insect pests and harvest in a timely manner, we maximize our cotton quality and therefore receive the best market price possible. I’m proud to say that our farms won a Georgia Cotton Quality Award in Region One in 2021.”

The cattle Raines owns are marketed through one of the best stockyards in the South, which happens to be in his home county of Turner. Watermelon sales are conducted by brokers who handle the boxing and shipping of the produce. Raines added, “We monitor the corn market ourselves. Most years we put the corn in our bins and market later in the year at a higher price.”

Scotty Raines Farms Partnerships recently purchased a bale picker to allow for faster harvesting and reducing the number of laborers in the field. And they have purchased a precision planter with individual hydraulic down force. This planter helps to get the seed placed at the right depth, even over terraces, and doesn’t overlap seed. The aim is to produce a better, more uniform stand at planting and a better harvest in the fall. Raines also has a cabin on his land that serves as a wedding and meeting venue, generating extra income for the farm.

Meeting challenges faced by all farmers is a constant undertaking. For Raines, a major effort has gone into converting dryland production into irrigated production. He has used long-term leases with landowners, purchased irrigated land/irrigation systems, and updated outdated irrigation systems. Another decision was to diversify by adding a watermelon crop and by increasing the number of corn acres under cultivation.

Raines has also had to deal with rising input costs over the years. He explained, “For example, in 1993 we bought a tractor for $35,000. Now that same tractor costs $200,000. We buy fuel in bulk to save money, but now a 7500–lb. tank might cost $37,000 to fill up. And the prices we get for crops don’t always equal what we paid to plant and nurture them through to harvest. It’s a constant balancing act.”

Of course one of the most prevalent unknowns is weather. Raines said, “Irrigation helps with drought, but hurricane Irma in 2017 and Michael in 2018 really hit us hard, and we haven’t fully recovered from those two events when we lost most our crop. Since crop insurance was insufficient to recoup the losses, we were able to do some refinancing to overcome the impact of these natural disasters.”

In the area of environmentally helpful practices Raines uses variable rate fertilization of lime, potash, and MAP to increase the nutrient efficiency and reduce the potential of oversaturation of unneeded nutrients and fuel wastage. The application is all based on the five-acre grid soil sample taken annually. To protect watersheds and reduce the potential for soil erosion, the farm maintains terraces and waterways.

He noted, “My farm has collaborated with the University of Georgia Extension on research efforts such as soil moisture sensor projects that monitor moisture status and manage water applications. This has greatly reduced the amount of irrigation water used to produce a crop. I also purchase bulk chemical contains to minimize plastic waste. When we do use plastic containers, they are recycled.”

Raines added, “We use conservation tillage methods and winter cover crops, like clover and rye, and now triticale, on the vast majority of acreage. It’s an important tool to help with weed control, improve soil moisture holding capacity, and support the long-term sustainability of our farm.

On the local county level, Raines is a current member and former chair and president of the Turner County Younger Farmer Association and a former president and board member of the Turner County Farm Bureau. The Raines’ were named Ashburn Turner County Farm Family of the Year in 2001. On the state level, he is the Georgia Farm Bureau District Director, serves on the Suwannee-Satilla Water Council, and was formerly the Southern Region Director of Georgia Young Farmers. Raines was also named Middle/South Soil & Water Conservationist of the Year in 2003. On the national level, he has served as a member of the Farm Bureau World Congress of Young Farmers. Melanie Raines currently serves as the chair of the Turner County Board of Elections.

In years past, when Scotty and Melanie have taken some free time, they’ve gone to St. Augustine to kick back and relax. More recently they’ve headed to the Gulf side of Florida, renting a small house or condo on the beach in Panama City or Destin. He said, “We also like go deer hunting with our daughters. Well, it’s more like I fix up the deer stands, and they do the hunting.”

After many years in the risk-laden business of agriculture, the reward of seeing things grow to fruition is still quite real for Raines. He commented, “We recently needed to plant 140 acres of peanuts on dryland on the north side of our property. The planter sat there for three weeks until the good Lord sent half an inch of rain so that we could go ahead and do what we needed to do. The same thing happened recently on the south side of our farm with cotton. We got one inch at almost the last possible moment. So that’s when we gladly give thanks for prayers answered.”

Scotty Raines was nominated for Georgia Farmer of the Year by Guy Hancock, University of Georgia Cooperative Extension, Turner County ANR Agent. He said, “I nominated Scotty Raines for this honor because he is a true representative of Georgia agriculture. He is a great collaborator on UGA Extension projects and is always willing to support our research and outreach efforts.”

He added, “Despite having to overcome numerous adversities in recent years such as tornados, hurricanes (Irma in 2017 and Michael in 2018), and other extreme weather events, Scotty has maintained a strong farming operation and a positive attitude through it all. He is always working towards integrating technology into his farm such as soil moisture sensors, GPS, and variable rate equipment to make the operation more efficient. The Raines family’s resilience and significant investments in agriculture have earned them the respect of those in their community and beyond.”

Swisher and the Sunbelt Ag Expo are sponsoring the Southeastern Farmer of the Year awards for the 32nd consecutive year. Swisher has contributed some $1,244,000 in cash awards and other honors to southeastern farmers since the award was initiated in 1990.