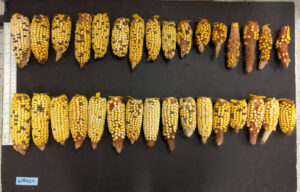 A new variety of corn, bottom, compared to a non-engineered variety, top. Both types were grown under warm nighttime temperatures, but the new variety had 40% greater yield — photo by Camila Ribeiro.jpg

Climate change will affect many agricultural crops, and field corn is likely no exception.

Field corn, the starchy cousin of sweet corn, is a globally important cereal grain used in livestock feed and other products. And it has an Achilles heel: unseasonably warm nights.

“Over the next several decades, as we see climate change lead to higher nighttime temperatures, this could mean farmers won’t be able to produce enough corn to stay in business,” said Mark Settles, professor in the UF/IFAS horticultural sciences department. “That’s a food supply issue and an economic problem.”

But Ribeiro and Settles may have a solution. In a new study, they show that a new variety of field corn is productive even when nights are warm. This variety was developed via a novel genetic engineering technique that inserts a copy of a corn gene to make a protein in a new location in the plant’s cells. This finding could help inform traditional breeding efforts down the line.

To test how well their new corn variety fared in the heat, the researchers planted it during March and April at the UF/IFAS Plant Science Research and Education Unit located about 30 minutes south of the main UF campus in Gainesville. Compared to the March plantings, the corn planted in April experienced warmer nights temperatures during kernel development.

The results were striking: the new variety produced 40% more yield under higher temperatures.

“In the field, we had plots planted with engineered and non-engineered plants. They were growing under the same conditions, same temperatures. As we harvested the field, we could see just how much bigger the corn ears were in the new variety under heat stresses. It was very exciting to see,” said Ribeiro, who completed this research as part of her a doctoral studies in plant molecular and cellular biology at UF/IFAS CALS.

“It was exciting because, for people like us who want to figure out how to grow food with climate change, this is a promising result,” said Settles, who was Ribeiro’s dissertation adviser. Ribeiro now works at the Brazilian Agricultural Research Corporation Maize & Sorghum in Brazil.

This new corn variety is more productive because the heat-sensitive PGD3 enzyme that allows the plant to store starch is getting extra help.

“PGD3 isn’t the only enzyme in the cell that catalyzes its specific reaction. You also have PGD1 and PGD2. Unlike PGD3, 1 and 2 aren’t sensitive to heat, but they don’t operate in the part of the cell where PGD3 operates, the amyloplast, which is the part of the plant cell that produces starch,” Settles said. “We wanted to find a way to move 1 and 2 into the amyloplast. Once there, we predicted they would be able to help kernels grow at higher temperatures.”

“Our study confirmed that when PGD1 and PGD2 proteins are relocated to the amyloplasts, it results in the characteristic we are looking for, heat resistance.”

The engineered genes open up the possibility of making new heat resistant varieties using traditional breeding techniques, the researchers said. Breeders could screen corn plants for heat-resistant forms of PGD3 to try to get the same effect.

“Our study is an example of how genetic engineering techniques can speed up traditional plant breeding processes by giving breeders insight into how genes confer desired traits. Climate change is happening fast, and we need to develop plants that will adapt to this new environment as soon as possible,” Settles said.

While such a corn variety may not be commercially available for several years, Ribeiro and Settles are hopeful that their plants will one day help feed a changing world.

The study was published in the journal PNAS.

The University of Florida contributed this article.