Which Nematicides Are Effective For Managing Nematodes In Field Corn?

Plant-parasitic nematodes can substantially reduce yield in field corn. Crop rotation and nematicide application are the main options for managing nematodes in corn. Among nematicides, historically a single product, Counter (active ingredient terbufos), has been the primary option for most growers. With new fluopyram-containing products (Velum and Propulse) becoming available in recent years, a multi-year study was conducted to compare efficacy of new and old nematicide products for nematode management in field corn production. 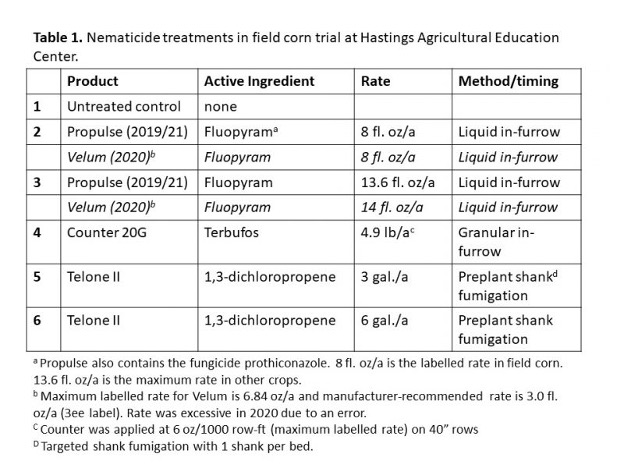 Counter 20G, Propulse/Velum, and Telone II fumigation (Table 1) were tested in small plot, replicated field trials at the Hastings Agricultural Education Center. As is typical for the region, corn was produced on hilled beds with subsurface (tile) irrigation on 40” row width. The trial was repeated in 2019, 2020, and 2021. In 2020, Velum (fluopyram only) was used instead of Propulse (fluopyram with prothiconazole) as Velum was introduced as the manufacturer-recommended fluopyram product in field corn. Due to a miscommunication about the new rate, Velum rates were above the labelled rate in 2020 (Table 1). Sting nematode was the primary target plant-parasitic nematode, with stubby-root nematode a secondary target, and a number of other less-damaging plant-parasitic nematodes were also present, but not reported here. Soil nematode populations at midseason (most important timing for assessment) and grain yield are reported here. In 2019, grain yield was not reported for control or Telone, as a planter issue selectively affected plant stand and yield in those treatments.

Plant-parasitic nematodes clearly affected corn productivity each year the trial was conducted, as visual symptoms were apparent during the season (Figure 1). Similarly, nematicide treatments affected crop yield each year (Figure 2). In 2019, corn yield was greater for Counter than either rate of Propulse, with an increase of about 40 bushels/acre. In 2020, when all treatments were assessed, Counter was also the top-yielding treatment by about 30 bushels/acre and had double the yield of untreated control. All other treatments increased yield numerically from control in 2020, but only Telone at 6 gallons/acre produced a statistically significant yield increase (other than Counter). In 2021, all products numerically increased yield (30-40 bushels/acre), although Propulse at 8 fluid ounces/acre had statistically similar yield to untreated control.

Examining basic economics (Table 2), any of the products tested are likely to provide a return on investment using current estimates of product costs and corn grain prices. Counter provided the best economic return on investment, largely because it produced the best overall yield. Extra costs of nematicide application, aside from product cost, were not included in calculations and Telone fumigation has the largest cost as an extra pass with specialized equipment would be needed for that product. Obviously, these returns are not guaranteed. In particular, these trials were conducted under severe pressure from nematodes and yield return when applying nematicides would likely be less when nematode pressure is lower. 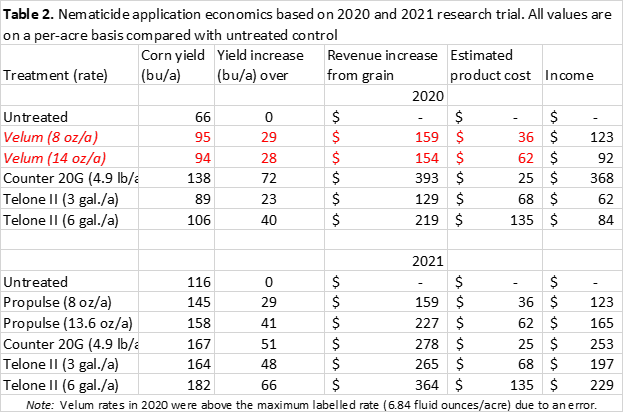 In summary, in fields with nematode pressure, growers should apply a nematicide. Counter was generally the most effective nematicide tested, but fluopyram products (Velum or Propulse) and Telone also provided a return on investment. This provides growers some flexibility based on their operation and available equipment (granular or liquid in-furrow rig). Telone is typically expected to out-perform liquid or granular nematicides like Velum or Counter, but was not the case in this study. CS