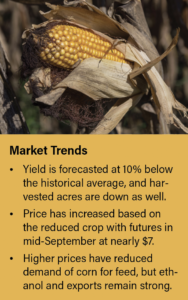 The forecasted yield potential for corn is almost 10% below the historical average, according to the U.S. Department of Agriculture.

In Mississippi, it was a late start at planting and high heat and drought during the peak season that led to reduced corn yield.

“Most of our corn crop this year was relatively late because of a lack of planting opportunities in March and early April due to rainy weather,” Larson says. “This means it was reaching its most sensitive reproductive periods when the hot temperatures started in mid-June.”

The state is expected to see an average per-acre yield around 172 bushels per acre. Since 2017, Mississippi growers have harvested between 174 and 189 bushels an acre on average. This year, growers in Mississippi planted 580,000 acres of corn, down about 150,000 acres from 2021.

On the demand side, Welch says the total use was down by 250 million bushels on lower numbers for feed, fuel and exports.

“This left ending stocks down by 169 million bushels to 1.219 billion. Estimated days of use on hand at the end of the marketing year were lowered by 3.7 to a 31.2-day supply,” he says.

MSU Extension agricultural economist Will Maples says the current national average corn price is projected at $6.75. This would be the highest price since 2012, when the national average was $6.89 per bushel.   “The December 2022 Chicago Board of Trade corn futures contract peaked in mid-May at $7.65 per bushel,” he says.

For the first time since March, Maples says, prices dropped below $6 in June, when there was a large corn contract selloff. The price has steadily increased since then based on the expectation of a smaller crop than originally estimated. As of mid-September, corn futures were $6.96 per bushel.

“These high prices have dampened the demand for corn used for feed, but demand for corn to produce ethanol remains steady,”  Maples says. “Export demand remains strong but is estimated lower than last year due to lower corn production in the U.S.

“The current estimate for corn use in the United States is that approximately 37% will go to feed, 37% to ethanol and 16% to exports,” he says. CS