Know When To Begin Irrigating Corn

The Mid-South has experienced a drastic change in the predominant weather patterns recently, prompting the decision of when to start irrigating corn. Of course, this transition is also physiologically challenging to our corn crop, but inadequate soil moisture is not nearly as limiting as usually perceived – considering we have literally been flooded all spring and it rained last weekend in many areas.

Thus, don’t be fooled by vegetative wilting into initiating supplemental irrigation without actually checking soil moisture and looking at the big picture. Premature irrigation is not only unnecessary, but may be detrimental to corn growth and productivity in our high rainfall environment in the long term.

The primary factor we should use to trigger initial irrigation is when soil moisture becomes limiting. As is the case this year, we often see corn leaves start rolling or wilting the first week or more we go without rain and temperatures drastically climb into the upper 80s or 90s, despite plentiful moisture in the soil.

Thus, leaf wilt is a poor or unreliable indicator of genuine drought stress in our environment. Thus, the key factor to determine crop needs is to make a conscientious effort to evaluate soil moisture throughout the root zone.

We should evaluate soil moisture availability using anything from simple methods to state-of-the-art soil moisture sensors to determine whether the crop actually needs more moisture and will respond in a manner that will ultimately enhance crop productivity.

Our extensive experience with moisture sensors over the years, generally show plentiful soil moisture present this time of year, especially 6 inches and deeper in the profile. It is important and beneficial to plant health to encourage root development and utilization of this abundant moisture during vegetative growth stages.

Our corn crop ranges in widely in age, depending on planting date, but most is in rapid vegetative growth stages (beginning at V6). Not only do plants rapidly attain height during these stages, but root growth and depth increase tremendously as well, as plants develop approximately 75% of root mass.

Premature and unnecessary irrigation, which is often the tendency in our region, can definitely retard and delay corn root development. Soil moisture sensors we’ve monitored in numerous Mississippi corn fields confirm these findings and also show root activity may progress to ultimately 36-inches deep or more in highly productive fields, if soil compaction and soil saturation do not limit growth. 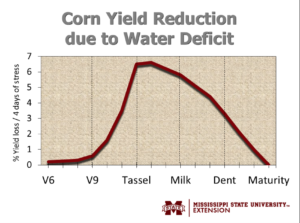 Since corn’s water demand and sensitivity to stress increase with plant size during vegetative stages (from emergence until tassel), plant growth stage also plays a very important role, but there is not a definitive growth stage when irrigation should commence.

Although corn at early vegetative stages is quite prone to wilt, it is very tolerant of water deficit, particularly prior to V9. Thus, there is little justification to expect yield loss resulting from water deficiency during early vegetative stages, especially when we have plentiful moisture in the soil profile. Therefore, we believe irrigation should be scheduled very conservatively until shortly prior to tassel.

We can discuss ad-nauseam when ear size determination begins, but the first and only corn grain yield component determined prior to tassel is the number of kernel rows per ear. If early season drought stress regularly limits corn yield potential during mid-vegetative stages, we would see considerably fewer kernel rows per ear on dryland corn compared to irrigated corn grown in otherwise similar culture – and this rarely, if ever occurs in Mississippi.

In fact, data collected from our MSU Extension Corn Hybrid Demonstration Program show corn grown in dryland plots have a similar or even slightly higher kernel row number than the same hybrids grown in irrigated plots. In other words, we are not normally giving up any corn yield potential associated with drought stress prior to tassel. Conversely, overabundant pre-tassel rainfall (or excessive irrigation) is a genuine issue and certainly will reduce corn yield potential when we overdo things.

Keep in mind that the traditionally highest irrigated corn yields in the world are produced in areas with annual rainfall about three times less than ours. This shows corn is better suited to a lot drier conditions than what we are accustomed to.

In fact, a former world record corn yield producer from the Corn Belt emphasized his yields would suffer if seasonal rainfall exceeded 30 inches. So we should recognize there are negative effects associated with overabundant moisture and adapt our corn management accordingly. After all, we commonly grow our row crops on raised beds to help relieve issues with overabundant moisture.

As corn approaches the critical tassel and early reproductive stages, corn irrigation should be scheduled much more generously in order to fully support increasing crop needs and avoid moisture deficit or surplus. A good rule of thumb is corn at V10 growth stage, which is normally 55-60 inches tall, is two weeks from tassel.

Therefore, this transition between irrigation strategies should occur shortly after V10 growth stage. This strategy of using a conservative strategy during vegetative stages, followed by generous irrigation during reproductive stages is supported by long-term corn irrigation studies conducted by Kansas State University and published on the Pioneer Growing Point Website: Safely Delaying the First Irrigation of Corn.

Their key findings include:

• Corn is much more resilient to early-season water deficit than expected.

• Initial irrigation can be safely delayed when soil moisture reserves are ample at planting and deficits are rectified prior to tassel and throughout reproductive development.

• Soil moisture in the profile was the best indicator for scheduling the first irrigation.

Dr. Erick Larson is Mississippi State University state Extension specialist for grain crops. He may be reached at e.larson@msstate.edu.