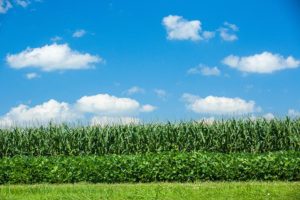 As the March 15 crop insurance purchasing deadline approaches, a University of Kentucky agricultural economist is reporting that revenue insurance will favor corn over soybeans for the second consecutive year.

The safety net, also known as the crop insurance price guarantee, is established at the end of each February and is based on futures prices for the December corn and November soybean contracts. The 2020 prices are $3.88 per bushel for corn and $9.17 per bushel for soybeans. These prices reflect a 12 cent decrease in corn and a 37 cent decrease in soybeans compared to the 2019 price guarantees for both crops.

“Revenue protection insurance has declined for soybeans since 2017 due to the increase in soybean stocks caused by trade uncertainty and an increase in soybean production,” said Todd Davis, economist in the UK College of Agriculture, Food and Environment. “While revenue protection insurance will not cover all of the projected variable costs plus cash rent for either crop, producers are likely to lose $4 and $15 per acre on corn and soybeans, respectively, at the 85% coverage level.”

Davis used an example farm’s actual production history yield of 185 bushels per acre for corn and 55 bushels per acre for soybeans, average total input costs and average cash rent prices in the estimated calculation. He said the risk protection provided by the insurance will vary based on each farm’s cost structure, actual input prices and cash rents paid, yields and the cost of the insurance.

“As managers consider the coverage levels purchased for 2020, they must first take stock of their farm’s financial strength and the availability of working capital to absorb a loss,” Davis said. “If working capital is limited, grain managers may want to consider increasing their coverage levels to protect their ability to cash flow this fall if there is a yield loss or price drop.”

Davis encouraged grain producers who plan to sell their crops at harvest time to lock in a price for their grain before harvest.

“If we have large corn and soybean crops in 2020, they will contribute to lower prices this fall and create profitability and cash flow challenges,” he said.