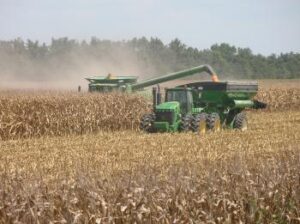 Corn harvest is underway, and some growers will be storing their grain on farm in bins for an extended period of time. Stored grain pests can cause significant losses if left unchecked.

There is an entire complex of insects that can infest grain stored in bins. There are several weevils and other beetles as well as some caterpillars that will feed on grain during storage. Many of these species live for several months and some may live for up to two years. The first line of defense against these invaders is placing grain into a clean bin.

An important source of infestations in grain storage facilities is old grain and grain dust that has been left in or around the bin. Even a small amount of grain or dust can produce a large number of stored grain pests.

Stored grain insects are very small and long lived. They can often survive for long periods of time with little moisture or food. Before placing fresh grain into a bin, floors should be swept clean of ALL old grain.

Any spilled grain near the outside of the bin should also be removed. One area that is often overlooked is the augers. These also need to be cleaned of old grain.

Once all bins and equipment have been cleaned, bin floors and walls should be treated with a residual insecticide just prior to placing fresh grain in the bin. Storcide II, malathion, Centynal or Suspend can be used to treat the inside of empty bins. While malathion is readily available, growers might want to take several things into consideration if taking this route. 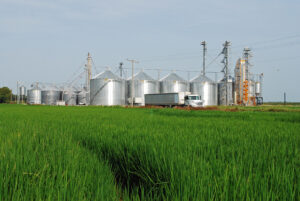 First, malathion is NOT LABELED for rice storage facilities. Also, liquid formulations of malathion cannot be applied directly to grain, only dust formulations. Most importantly, many species, such as Indian meal moth, red flour beetle and lesser grain borer, have developed resistance to malathion.

Remember, proper sanitation of bins will go a long way in preventing insects from attacking grain while in storage.

Once grain is ready to go into the bin, it should be treated with an insecticide if it is going to be in storage for very long. Always check labels.

While some insecticides can be used on multiple types of grain, others are restricted to only certain crops (such as Actellic, which can only be used on corn or grain sorghum). Stored Grain Insect Control can be found under the Row Crops section of MP 144 where a list of recommended insecticides and rates can be found.

This information is also available in the Mobile Friendly Version of MP144. Application rates for bin wall and floor treatments can also be found in this section of MP144.

Even under the best circumstances, infestations can occur if grain is stored for an extended period of time. Once grain becomes infested, fumigation will be necessary to eliminate insect pests.

Fumigants are dangerous and extreme caution is recommended when using them. Never enter a bin that has been fumigated until it has been well ventilated. Fumigants also take three to five days to work effectively.

This work is supported by the Crop Protection and Pest Management Program [grant no. 2017-70006-27279/project accession no. 1013890] from the USDA National Institute of Food and Agriculture.

Dr. Glenn Studebaker is a University of Arkansas Extension entomologist/IPM coordinator. He may be reached at gstudeba@uark.edu.