Start With The Seed 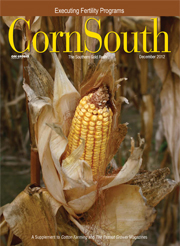 To give corn the ability to maximize yield, you have to think about the seed you’re going to plant before it ever goes into the ground. With this in mind, more farmers who are planting corn in the South are utilizing seed treatment packages to give each and every plant the best possible start in kicking off the growing season.

“The key is to protect those corn plants very early,” says Syngenta’s Scott Martin, technical product lead for Avicta. “If plants grow off faster with reduced stress, the farmer realizes the yield benefit later. The first three to four weeks are really critical.”

One seed treatment package that is gaining popularity is Avicta Complete Corn as Southern corn growers have become more aware of it and had some experience with it.

Avicta Complete Corn is a combination product that provides triple protection against nematodes, early season insects and diseases. “The fungicide package is called Maxim Quattro, which has four fungicides in it,” Martin says. “We combine that with thiamethoxam, which is our flagship insecticide product for seed care, and Avicta, which is our nematicide product.”

Martin points out that Avicta is a true nematicide in that it kills nematodes.

“Nematodes are a widespread problem in the South, and Avicta Complete Corn is effective on all nematodes that impact corn,” he adds.

Other benefits that seed care products can provide are early season insect control and seedling vigor. A healthy plant that is relieved of early season stress typically comes out of the ground faster and grows off a little faster. In the case of corn, this type of scenario is important because the first three to four weeks of the growing season are critical to determining yield.

David Dooley raises corn, cotton, soybeans and cattle in the hill area of Yazoo County, Miss. He typically includes NK Seeds with the Agrisure Viptera trait in his corn hybrid mix. In 2012, he added the Avicta Complete Corn seed treatment.

“We’ve had nematode problems in the bottomland where we intended to have some corn this year, so, to be safe, we planted the Viptera package that included nematode control,” Dooley says. “We are all dryland, and we did see a yield increase and seedling vigor was good, but we also had plenty of rainfall compared to the drought we suffered in 2011. We couldn’t have irrigated any better this year than the good Lord did for us.”

Although Dooley admits that 2012 may not have been a good “test year” for his first time to try Avicta Complete Corn seed treatment, he says he does intend to try it again in 2013.

“We’ve had a good fall and have accomplished a lot of field work so far,” he says. “It seems like we will be planting corn before we know it!”