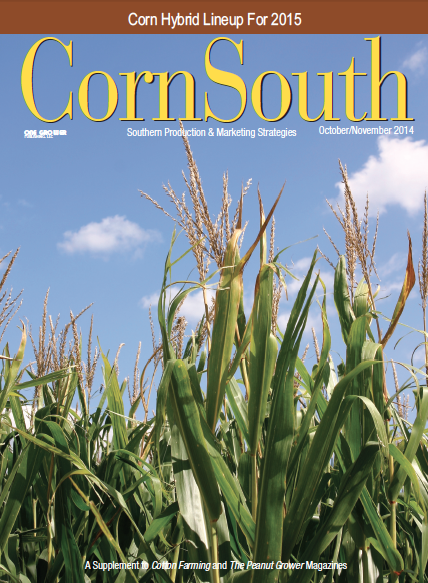 Editor’s Note: Mark Welch is a Texas AgriLife Extension economist. Nathan Smith is an agriculture Extension economist with the University of Georgia. The opinions and recommendations expressed are solely those of the authors and are intended for educational purposes only. The respective universities assume no liability for the use of this information.

The condition rating of the U.S. corn crop improved two points last week on a one percentage point decrease in the poor category and a one percent increase in the good. The crop condition index stands at 385 compared to an average index score at this time of year of 355.

Corn Use
Updated estimates of U.S. grain consuming animal units (GCAU) show a record low percentage of the total for cattle and a record high percentage for poultry. Total GCAUs for 2014 are estimated to be only slightly higher than last year. Feed per GCAU is up 4.4 percent or 173 pounds per GCAU, back up to levels last seen in 2004. Ethanol production in the 2013/14 corn crop year is closing out up 10 percent from last year and 5 percent higher than the three-year average. Exports in 2013/14 are on pace to reach the current 1.920 billion bushel target.

Outside Markets
Speaking at the Federal Reserve Bank of Kansas City Economic Symposium in Jackson Hole, Wyo., Aug. 22, Fed Chair Janet Yellen said she was encouraged by the employment gains made by the U.S. economy since the Great Recession, but recognizes that the labor market is not yet fully recovered. The U.S. economy grew at a faster pace in the second quarter than first estimated, 4.2 percent instead of the previous 4.0 percent increase. The gap between the civilian unemployment rate and the overall unemployment rate has declined to 6 percent, down from the post-recession average of 6.7 percent but well above the pre-recession difference of 3.9 percent. Overall inflation levels remain moderate. The food category showed the most increase in last month’s Consumer Price Index; energy was down.

2014 Marketing Plan
I am 60 percent priced on 2014 feed grain production. My marketing plan calls for pre-harvest pricing an additional 20 percent around the time of the August crop report. December corn has traded in a sideways pattern the last several weeks with a short lived rally back to $3.80 only to fall back to about $3.60. The market seems to be balancing good crop conditions and strong early season yield reports against some question of acreage and increased use estimates. I am ready to add to price protection on a technical signal that the market is turning lower.

Nathan Smith: Southern Corn Production Shifts
Last year was a big year for corn in the South. Southern states from Virginia down to Florida across to Louisiana and up to Missouri produced a record corn crop with some states producing an all-time high production and the rest producing the most bushels since at least 1985. The exception was Missouri, which had a larger crop in 2010. The 11 states of Alabama, Arkansas, Florida, Georgia, Louisiana, Mississippi, Missouri, North Carolina, South Carolina, Tennessee and Virginia have averaged planting 8.5 million acres from 2007- 2014 representing 9.3 percent of total U.S. acreage. Corn plantings in those states averaged 6.7 million acres during the previous eight-year period of 1999-2006. Comparing the two time periods, southern corn states averaged 2.6 billion more bushels during 2007-2014 than 1999 to 2006.

Yield Projections
Yields across the South look good overall for 2014 based on USDA projections, while Missouri expects a record yield increase of 25 percent over last year. With harvest underway in the South, a record U.S. yield is projected at almost 172 bushels per acre. If realized, it would be a record total production of 14.4 billion bushels based on 91.2 million planted acres.

Corn Usage
Total use of corn is expected to equal the previous crop marketing year at 13.6 billion bushels. Ethanol and by-products use is flat at 5.125 billion bushels. Exports are down 200 million bushels; therefore, domestic feed and food use will have to increase to make up the difference. Prices received by farmers are expected to average the lowest since 2007, between $3.20 and $3.80 per bushel.

Market Options
Farmers will likely store and wait for higher prices. The low prices should spur some increased demand but it will take a while for it to materialize since the domestic food and feed sectors don’t traditionally adjust quickly. The trend of decreased acres is likely to continue next year for the South.