For whiskey, the proof is in the taste, says Texas A&M student 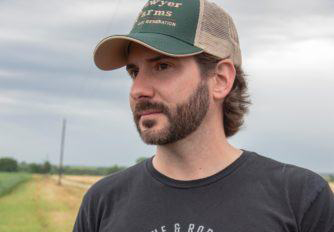 Many bourbon drinkers may not know it, but corn is the key ingredient in their favorite drink. What grapes are to wine, corn is to bourbon whiskey.

So a few years ago, Texas A&M University doctoral student Rob Arnold had a eureka moment: If you improved the taste of the corn, would it mean a better tasting bourbon? He believes he is close to an answer.

Arnold has been studying how different hybrids of corn and their genetic makeup can affect the taste of whiskey. Since American Prohibition, distillers have mostly used whatever corn was available, and that usually meant using common yellow dent corn, the same type that in recent decades is used primarily for animal feed and even ethanol for cars. These common yellow dent varieties are relatively similar genetically, and they have been bred for yield, not flavor.

Arnold looked at winemakers as an example. There are more than 10,000 types of grapes used to make wines, and thousands of corn varieties, so why aren’t whiskey distillers more selective with their corn?

“The more I looked at it, something was not right,” he said. “Using only yellow dent corn to make whiskey is like asking a winemaker to make wine using only red Concord grapes. It didn’t make any sense.”

For the past three years, he has been screening Texas A&M-developed corn varieties. He and his colleagues have narrowed it down to three hybrids that provide similar — they believe even better — yields as commercial yellow corn hybrids, but with more unique and diverse flavors.

Arnold, a Kentucky native, has degrees from the University of Tennessee and University of Texas Southwestern Medical School and has been pursuing his doctorate in plant breeding at Texas A&M under the supervision of Seth Murray, Texas A&M professor and the Butler Chair for Corn Breeding and Genetics.

“Texas A&M was the first and only school to offer a distance Ph.D. in plant breeding, and it is perfect for students like Rob who have full-time jobs but also thirst for new knowledge and expertise to build into their careers,” Murray said.

“Thanks to the vision of the Texas Corn Producers Board, USDA-NIFA and Texas A&M AgriLife Research, we have one of the last public sector corn breeding programs in the United States. Working with Rob has allowed us to leverage exciting new varieties developed to help Texas farmers to also add value to new industries and help give consumers something they want – better tasting whiskey.”

Proof is in the whiskey

Arnold has been growing and testing the three Texas A&M hybrids at Sawyer Farms in Hillsboro, and the entire project is entering its fifth year.

By 2022, Arnold expects his distillery to stop using the commercial yellow dent corn variety they currently grow and move solely to one or more of the Texas A&M hybrids. The project is funded by the Fort Worth-based Firestone & Robertson Distilling Co., makers of TX Whiskey.

“Rob is an outstanding scientist, distiller and student, and between publishing a book on the science of whiskey and the first peer-reviewed journal article on corn whiskey, he is the world leader in this area,” Murray said.

There is proof, so to speak, that whiskey has been around a lot longer than many people think – it was first mentioned more than 2,000 years ago in ancient scrolls. In 1494 books in Scotland first used the term “whiskey” and fast forward to 1775 when whiskey was actually used as a form of currency in the Revolutionary War.

From 1791-1794 the famous “Whiskey Rebellion” occurred when farmers protested against high grain prices. In 1820 Scottish grocer John Walker started his own brand which became wildly popular and everyone loved its taste – except Walker himself who ironically was a non-drinker.

Arnold, who became the first master distiller at F&R Distilling Co. in 2011, cites the useful help of Sawyer Farms, Ale Ochoa of F&R and Jake Pekar, another Texas A&M doctoral student who will be graduating soon, as being keys to success so far. And he’s glad his long journey is nearing the end.

“It’s been fun and interesting, and I think we’re on the right track for discovering new and forgotten flavors in whiskey,” he said.