Know when to terminate corn irrigation 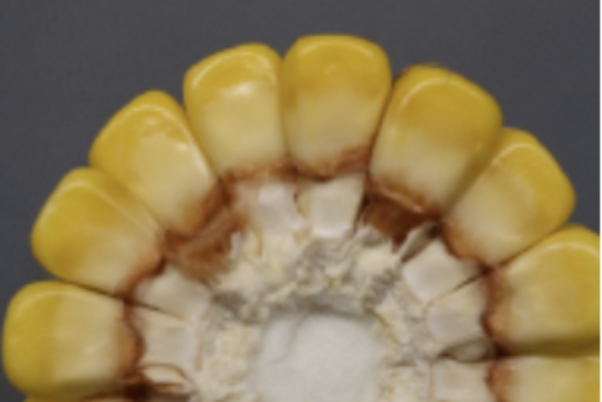 With much of our early-planted corn denting (Figure 1), kernels are filling weight and size. Since heat unit accumulation has been lower this year, crop development may be a few days behind schedule.

As the corn crop approaches maturity, one of the most important management decisions you will make is when to terminate irrigation. Factors such as estimated time to maturity and soil moisture should be considered when making this decision. Corn kernels continue to gain weight and size until physiological maturity or black layer (R6).

Previous research has shown that terminating irrigation too soon during the dent stage (R5) can reduce grain yield up to 20%.

Staging corn at the R5 growth stage is done by monitoring the milk line (Figure 1). To see the milk line, break a corn ear in half and look at the cross-section of the top half of the ear (the side of kernels opposite the embryo).

The starchy solid interior portion moves from the top of the kernel toward the cob as the kernel matures. Kernels within the R5 growth stage are specifically designated by the progression of the milk line: one-quarter, one-half or three-quarters.

Progression of the milk line and time required between each quarter are temperature, moisture and hybrid dependent. It generally takes around 24 days for the milk line to progress through the entire kernel profile.

Following the progression of the milk line during R5 is a good way to estimate when a field will reach R6. This stage can be identified by a black layer at the tip of the kernel (Figure 1). Once a field reaches black layer, irrigation can be terminated since any stress has little effect on grain yield.

Dr. Matt Foster is LSU AgCenter corn specialist. He may be reached at MFoster@agcenter.lsu.edu.