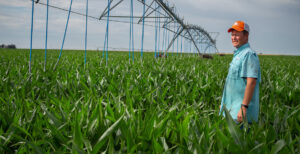 “Profit margins are tight for most farmers, so anything we can do to help them manage risk is a benefit,” Wagner said.

Surveys show only about 10% of producers are using recent advances related to improved irrigation scheduling and technology. The primary reason given by producers is the operational cost associated with new equipment.

Subsurface drip irrigation technology is featured at the Oklahoma Panhandle Research and Extension Center in Goodwell. Irrigation projects using a center-pivot system are showcased at the division’s McCaull Research and Demonstration Farm located near Elkhart, a town that sits on the border of Oklahoma’s Texas County and Kansas’ Morton County.

Irrigated cotton grown annually in Oklahoma increased from about 60,000 acres in 2003 to about 114,000 acres in 2018. Between them, the Panhandle counties of Beaver, Texas and Cimarron produced an average of about 108,000 acres per year of irrigated corn in the past decade. In total, a 2018 OSU research survey indicated 1,835 Oklahoma farms irrigated 601,492 acres of their total 3.4 million acres involved in agricultural production.

“The TAPS program also provides a research framework where the management treatments are based on producer experiences instead of our own,” said Jason Warren, OSU Extension soil and water conservation specialist and researcher. “This allows us to better understand how producers may manage water for efficiency and compare strategies in a replicated setting to generate data that can be shared with everyone to improve success in efficient irrigation management on farms.”

A primary reason for the widespread interest and support is that much of the grain-growing region of the Great Plains – including the Oklahoma Panhandle – relies heavily on the Ogallala Aquifer. The aquifer stretches across eight states and supports about 30% of all agricultural irrigation in the United States, in addition to residential and industrial uses.

“Unfortunately, the aquifer cannot keep up with the demand, recharging slower than water is withdrawn,” Warren said. “This underscores the need for everyone – including agricultural producers – to make the most efficient use of available water resources if their operations are to be sustainable.”

From 2001-2008, water depletion from the aquifer was about 32% of the cumulative total measured during the entire 20th century, according to the U.S. Geological Survey.

For more information about Oklahoma State’s TAPS program, contact the Oklahoma Panhandle Research and Extension Center’s Sumit Sharma by email at sumit.sharma@okstate.edu or by phone at 580-349-5440.

Know when to safely terminate irrigation