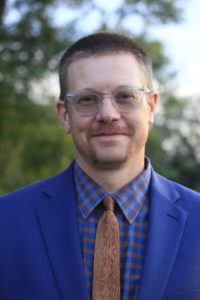 As the human population booms, we hear the term “sustainable food supply” a great deal. One Texas A&M AgriLife researcher’s efforts to make corn production, whether for human or livestock consumption, more sustainable has earned him national recognition.

Texas A&M AgriLife Research corn breeder Dr. Seth Murray is the Eugene Butler Endowed Chair in the Department of Soil and Crop Sciences in College Station, and he is among the finalists for the prestigious Blavatnik National Award for Young Scientists.

Murray determined that individual genes poorly predict corn yield, so he began to evaluate the physical and spectral traits, the “phenome” of corn instead. Through the innovative use of statistical analysis of images collected from drones, he along with colleagues and students on his team examined the physical traits of corn over time and model traits to predict the highest yielding plants, optimizing breeding and selection.

While innovative breeding strategies have mostly focused on developing higher yielding and more stress and aflatoxin resistant corn, Murray is also in the process of creating perennial varieties of corn that could revolutionize agricultural practices and ensure the sustainability of corn production.

“Dr. Murray is leading the way in crop breeding and the use of advanced technologies that will allow growers to benefit from higher yields and increased stress resistance in corn,” said Dr. Patrick J. Stover, vice chancellor of Texas A&M AgriLife, dean of the College of Agriculture and Life Sciences and director of AgriLife Research. “His pursuit to contribute to a safer and more secure food supply for our nation epitomizes the spirit of a land-grant university.”

The Blavatnik award is presented by the New York Academy of Sciences that recognizes America’s most innovative young scientists and engineers. Thirty-one of the nation’s rising stars in science were announced June 17 as 2020 finalists of the prestigious award, the world’s largest unrestricted prize for early career scientists.

Murray was chosen from 305 nominations from 161 academic and research centers across 41 U.S. states,and is competing to be one of three Blavatnik National Awards laureates, one in each of the award categories: chemistry, physical sciences and engineering, and life sciences. Each laureate will win $250,000. The three 2020 Blavatnik National Awards laureates will be announced on July 22.

Launched in 2007 by the Blavatnik Family Foundation, the awards were created with the New York Academy of Sciences to enhance research funding opportunities and emphasize the work of promising scientists under the age of 42 in three disciplinary categories of science and engineering.

Murray focuses his research on solving large-scale problems in crop production through plant breeding and technology, including the use of unmanned aerial vehicles, UAVs or drones, in agricultural decision making.

Murray, a world-renowned expert on crop field phenotyping, co-led a project of 40-plus faculty across disciplines in developing procedures for scaling UAV technology for breeding and precision agriculture. This project led to his program’s focus on crop characteristics and use of high-throughput measurements to select the most promising varieties in a breeding program.

“Corn is a tremendously productive crop, and through scientific discoveries farmers have increased yields eight-fold over the last 100 years,” he said. “That means one-eighth of the land is needed to get the same production, freeing up land for recreation, urbanization, wildlife or simply producing additional crops needed to feed a growing population.”

The next generation of UAVs and phenomics research will allow further improving crop yield while also improving the economic and environmental sustainability of growing them, Murray said.

Kay Ledbetter is a communications specialist for Texas A&M AgriLife Research. She may be reached at skledbetter@ag.tamu.edu.