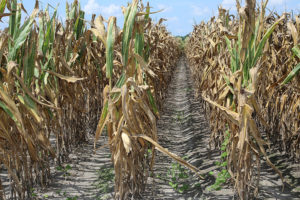 Georgia corn farmers are preparing for harvest, but they can’t take a break once they ship their crops to market. That time should be focused on staying ahead of weeds that can cripple the next year’s crop.

University of Georgia Cooperative Extension corn weed specialist Eric Prostko says that Palmer amaranth, also known as Palmer pigweed, has the potential to produce seed in corn fields up until the first frost. He urges Georgia producers to consider appropriate management options before leaving the field unattended for the winter.

The first frost typically does not occur in Georgia until November. In the three months between harvest and frost, pigweed can continue to grow and reproduce at a high rate. If not managed, a female plant could produce approximately 400,000 seeds.

After corn harvest, Palmer amaranth plants that emerge up until 35 days before the first frost have the potential to produce viable seed, Prostko said.

“The season is not over. What farmers do after they’ve harvested their corn is equally important as what they just did during the season,” he said. “When the farmers get the corn harvested and they’re not doing anything during that period from August to November, if they allow the pigweed to go to seed just after they’ve worked to keep pigweed out of their fields for the last couple of years, they will have ruined all of that work.”

Tropical spiderwort — also known as Benghal dayflower — can also go from germination to seed in about 40 days. Tropical spiderwort is characterized by late-season emergence and, if uncontrolled, can produce seed and contribute to weed problems for future crops.

Prostko recommends farmers either use tillage or herbicides to control spiderwort.

If fields are tilled, they should be cultivated every three to four weeks while spiderwort is emerging. If herbicides are used, they must be applied after the plants have recovered from any damage caused by harvesting equipment, when they are actively regrowing or are less than 6 inches tall.

For farmers in southern Georgia counties who plan to double crop, he says that planting soybeans or grain sorghum after corn is an excellent way to help manage postharvest weed problems.

The University of Georgia contributed to this article.