This week I received the first sample of southern rust in corn from Martin, Tennessee (Weakley County).

Not surprisingly after the storms of Barry, more counties along the Mississippi river have confirmed southern rust (Image 1. Confirmed reports of southern rust can be found at https://corn.ipmpipe.org/southerncornrust/). 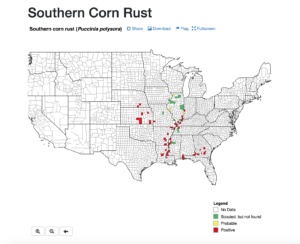 The majority of corn in Tennessee is past the point of benefiting from a fungicide application (growth stage R5 – dent) even with southern rust now present. Furthermore, the severity of southern rust in Tennessee and surrounding areas is low and hence risk to yield is not high.

Fields that are just now tasseling could benefit from a fungicide application (i.e. reduce disease development), but careful consideration to yield potential should be used to determine if fungicide would be economically beneficial.

Other diseases that have been noted in corn are grey leaf spot, physoderma brown spot, northern corn leaf blight and diplodia leaf streak.

A previous article at news.utcrops.com on corn planting in 2017 from Angela McClure provides some information on yield potential for later planted corn (those fields that are now tassling).

In brief, “Expect some yield reduction: Without irrigation, yields may be about 15% lower when corn planting is delayed…Fifteen percent doesn’t sound like much until you consider the tight profit margin for corn…Be Judicious with Inputs in Dryland Corn: Use inputs that pay and skip questionable practices.”

Dr. Heather Marie Kelly is a University of Tennessee Extension plant pathologist. She may be reached at youngkelly@utk.edu