A team of researchers from the University of Arkansas are designing tiny sensors that can be placed in corn stalks to monitor water, nitrogen and potassium needs in real time. 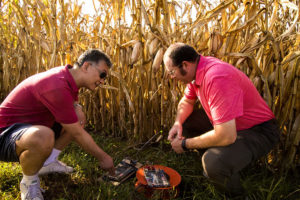 The data collected from those sensors — matched with geographic, weather and other environmental data — will feed machine learning software to develop models that will be able to predict when a crop will need those inputs before the conditions exist. Those predictive models can help corn growers give their crops exactly the water and nutrients they need, before they experience stress, to achieve the best possible yields without wasting resources.

The collaborative research by the university’s Arkansas Agricultural Experiment Station and College of Engineering is supported by the Chancellor’s Discovery, Creativity, Innovation and Collaboration Fund.

Farmers deal with these issues now in one of two ways, Roberts said. “A high-inputter is proactive, over-applying water and nutrients in order to avoid stress or deficiencies.” That approach maintains optimal yields, he said, but it comes with high costs for fertilizers, fuel to run equipment and pump water.

“A low-inputter waits until he sees stress or nutrient deficiency. He may save money on the front end, but may lose yield at harvest.”

A model that can predict a crop’s water and nutrient needs before they occur can cut the costs of over-applying without losing yield, he said.

To develop such a system, Roberts joined a team of researchers that includes Jia Di, professor and 21st Century Research Leadership chair in the department of computer science and computer engineering; Alan Mantooth, distinguished professor and 21st Century Research Leadership chair, and professor Simon Ang, both from the department of electrical engineering; and Jie Xiao, associate professor of chemistry and Arkansas Research Alliance scholar.

They developed a tiny sensor that is inserted into a cornstalk near its base. Di said they began with dummy sensors to test materials and dimensions that could accommodate the electronics without impeding the growth and development of the plant.

“The electronics can be very small,” Di said, “but the limit on miniaturization is the antenna. It must be large enough to send a signal to a base station.”

The resulting sensor looks like a slightly oversized thumbtack. The current prototype was manufactured by the University of Arkansas High Density Electronics Center and it relies on an external power source. Di said they have developed a microbattery that will be integrated into the sensor and the electronics in the next prototype to be produced in October.

To measure that information now requires researchers to take tissue samples, send them to a lab and wait for test results. “It’s time consuming and expensive,” he said.

“So far, we’ve been testing proof of concept,” Roberts said. “And we have a viable sensor.”

To develop predictive models, Di said, the data from the sensors will be fed into a machine learning program along with environmental data, including soil texture, planting date, weather data, geographic location and other information that affects plant growth and productivity.

The more information is gathered over time, he said, the more accurate the predictive models become.

“Now that we have a working sensor,” Roberts said, “the next step is to see how many we need in a field to get useful data. We’re right in the middle of the process.”

Di said the research team will also be determining the best means of collecting the data. The sensors are designed to transmit to a base station, but Di said he doesn’t think putting that station permanently in the field is the best option. “I think we’ll probably attach the base station to a tractor or truck and drive around the field to collect the data.”

Each sensor has an ID code so they’ll know where in a field each data set came from.

“Next, we want to develop a sensor that dissolves in the field after harvest,” Roberts said. That saves the time and labor of finding and removing each one year after year.