Reassess your strategy regarding tassel applications

Mississippi’s corn crop is spread out this year across a considerable range of planting dates, with a few early fields already tasseling, and the bulk will be soon. Tassels clearly distinguish the transition from vegetative to reproductive growth stages in corn.

The early corn reproductive stages are the most sensitive stages to environmental stress and thus, growers often focus management to improve plant health during this period. The variance in corn age, as well as environmental challenges, may create questions and challenges regarding various management operations. Additionally, crop responsiveness to different practices may vary considerably depending on how and when they come into play.

Corn physiological sensitivity to stress, photosynthetic capability and plant response to other limitations certainly varies with growth stage. Early reproductive growth stages, particularly during and shortly following pollination are the most sensitive to limitations, and as plants mature, they generally become much more resilient.

Corn is very sensitive to stress at early reproductive stages because plants are swapping energy allocation from vegetative to reproductive organs, and small, immature reproductive organs have little ability to draw energy reserves from vegetation at this time. This makes developing kernels very dependent on current photosynthetic rate to supply energy needed to optimize development and ultimately productivity.

Does this mean tassel stage is the best timing for various inputs intending to improve plant health? Not necessarily — if your corn crop is currently very healthy and there are no impending limitations threatening, you shouldn’t expect the crop to be any more responsive to management timing at tassel stage.

For instance, our research has consistently shown automatic fungicide application at tassel stage is rarely going to improve corn yield or plant health in the absence of foliar disease.

The most popular subject regarding this topic is timing of top-dress or supplemental nitrogen. Most of our early planted corn crop will be tasseling shortly, but tassel dates will vary more than normal this year because of the range of planting dates. Diverse weather conditions can also complicate the success of broadcast nitrogen application for different reasons.

So should you be concerned about missing the opportunity for best response, or do you have some leeway for fertilizer timing and effective incorporation of your “tassel shot?” The answer depends on the condition of your crop and what has transpired until this point. These two scenarios generally address most situations we are likely to encounter:

If your crop is currently healthy and dark green, and your tassel shot is part of a planned program to improve seasonal nitrogen efficiency, then precise timing should not generally be critical. This is reasonable because corn nitrogen uptake at tassel is only about 65% of seasonal demand, so unless catastrophic loss has occurred, you should already have plentiful nitrogen available at this stage.

Your primary goal with this strategy is to maintain ample nitrogen to fully support productivity until the end of the long growing season, when nitrogen supply is most likely to diminish. In other words, in this scenario, it is not necessary to sweat whether you apply supplemental nitrogen at V12, V15, tassel or even brown silk.

Center-pivot irrigation will also serve this purpose well, but our predominant furrow irrigation systems do not incorporate fertilizer as effectively because water only flows in the furrow, so granules located elsewhere on raised beds are not readily incorporated and thus, subject to volatility loss.

Thus, we strongly recommend using a urease inhibitor containing the active ingredient NBPT to minimize volatility of top-dressed urea. Also, we have little ability to regulate the amount of water applied with furrow irrigation, so it is easy to keep soil much wetter than desired, which stunts plant growth and increases nutrient loss in the long run.

If you applied a considerable amount of nitrogen prior to a lengthy wet period, losses will be higher compared to later-timed applications which are less exposed. Nitrogen deficiency is relatively simple to identify by observing yellowing of lower leaves beginning at the leaf tip and progressing down the midrib in a “V” shaped pattern as shown below. 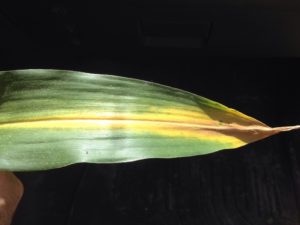 Since the fertilizer will not be available to the crop until it is incorporated, it is best to apply fertilizer prior to forecast rainfall or over-head irrigation, and well prior to the critical pollination time. However, realize that supplemental nitrogen will not overcome stunting caused by soil saturation or soil compaction.

Another topic often asked is whether physical disturbance from rainfall, overhead irrigation or a management practice, such as top-dressing fertilizer near tassel might affect the pollination process.

The short answer is usually no, as corn has several traits which ensure there is ample opportunity to successfully pollinate. These traits include:

1. A huge abundance of pollen (about 5,000 pollen grains per ovule or potential kernel).

3. Tassels primarily shed pollen when conditions are favorable (not when tassels are wet or temperature is hot).

Ear development and pollination problems, however, have been associated with pesticide applications occurring near or just prior to tassel stage, particularly around V14 growth stage (about seven days prior to tassel).

This phenomenon has been referred to as arrested ear development, blunt ear syndrome or beer can syndrome. These issues have been most commonly documented when fungicides were applied on corn near tassel, but the cause of damage has been generally been correlated with spray additives, including surfactants or crop oil, and herbicides included in the spray.