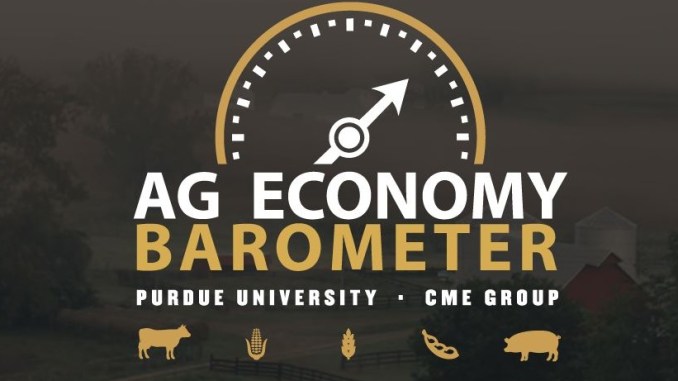 Perdue University’s Center for Commercial Agriculture conducts a monthly survey on farmer sentiment called the Ag Economy Barometer. The most recent poll is rife with producer concerns going into the season.

The index is based on producers’ responses to whether they expect their farm’s current financial performance to be better than, worse than or about the same as the previous year.

In January, 52% of respondents said they plan to reduce farm machinery purchases in the upcoming year. Supply chain issues continue to hamper farmers’ investment plans as, for the third month in a row, over 40% of producers reported that low farm machinery inventories were holding back their purchase plans.

Supply chain concerns extend beyond farm machinery and farm building/grain bin construction plans. Disruptions in the supply chain for many farm inputs, coupled with strong demand, are pushing production costs higher. Fifty-seven percent of survey respondents in January said they expect farm input prices to rise by 20% or more in 2022, and 34% of producers said they expect prices to rise by 30% or more.

Disruptions extend not just to pricing, but also to input availability. In January, 28% of producers said they have had difficulty purchasing inputs for the 2022 crop season. In a follow-up question, respondents reported difficulty in purchasing a broad spectrum of crop inputs including herbicides, insecticides, fertilizer and farm machinery parts.

The bright point in this gray horizon is that crop prices for corn, cotton and other grains remain strong. Mark Welch, Texas A&M ag economist says the wheat market is experiencing volatility because the Ukraine is a significant producer. Other markets, including corn and soybeans, are also watching South America where drought is putting upward pressure on price. Read more from Dr. Welch in the article “Market Concerns” adjacent to this column.

No one ever said farming was easy, at least no one who knew what they were talking about. But the producers I know are resilient. Hopefully, the January survey will be lowest this year and sentiment will rise as problems are resolved.