At a winter production meeting in Hazen, Arkansas, University of Arkansas System Division of Agriculture Extension weed specialist Tommy Butts had one message, “This is a year to survive.”

Weeds have long been a challenge in row crop agriculture, threatening everything from degraded crop quality to significant loss of yield. And while herbicide technology has improved over the decades, the tendency of weeds to develop resistance has gradually imperiled that technology’s effectiveness.

In 2022, growers will also face a disrupted supply chain and a throttled availability of many of the herbicide technologies they’ve come to rely on. Issues affecting supply include production facility destruction from natural disasters, shipping problems and labor shortages caused by the ongoing COVID-19 pandemic, a plastics shortage and China’s move to reduce air pollution ahead of the 2022 Winter Olympic Games. Because of this, growers face both limited availability and skyrocketing prices for herbicides and more.

Butts says the situation may lead growers to make one of two bad decisions.

“I have two primary concerns for this year,” he says. “One is the high prices of some of our primary herbicides, like glyphosate and glufosinate. Those two are potentially in short supply, as well as atrazine for corn and some others.

Butts warns that if cutting back is the choice, then more than likely, you are going to have weed escapes. While it may or may not directly affect your yield this year, growers are replenishing the weed seed bank, setting up future problems.

Enlist herbicides [Enlist One (2,4-D choline) and Enlist Duo (2,4-D choline + glyphosate)] were recently granted amended seven-year registrations for over-the-top applications on Enlist corn, cotton and soybean. However, numerous counties have prohibited the use of the product. Additionally, growers should be aware of new labeling guidelines to reduce impacts of off-target movement. Contact your Extension agent for information on the use of Enlist in your area.

Prices On The Rise

Like fertilizer, which has risen 200-300% over the last year, herbicides such as glyphosate and glufosinate have also risen as much as 300%, costing $53 and $120 a gallon, respectively.

Scott Stiles, Extension economist for the Division of Agriculture, says herbicide prices are among the many input costs growers will grapple with this year.

“Diesel prices have moved sharply higher since Dec. 1,” Stiles says. “Diesel is up 75 cents a gallon over the past two months and is at the highest levels since September 2014. Farm diesel prices are around $3.05 to $3.10 a gallon today — compared to $2.60 a gallon we used in the crop budgets back in November. That level of increase has added $20 an acre to our rice variable costs, $10 an acre to soybeans and $11 to $13 an acre for corn and cotton, depending on irrigation method.”

“Growers who are having trouble finding glyphosate and/or don’t like the price, might have a better chance of getting it in a pre-mix formulation,” Prostko says. 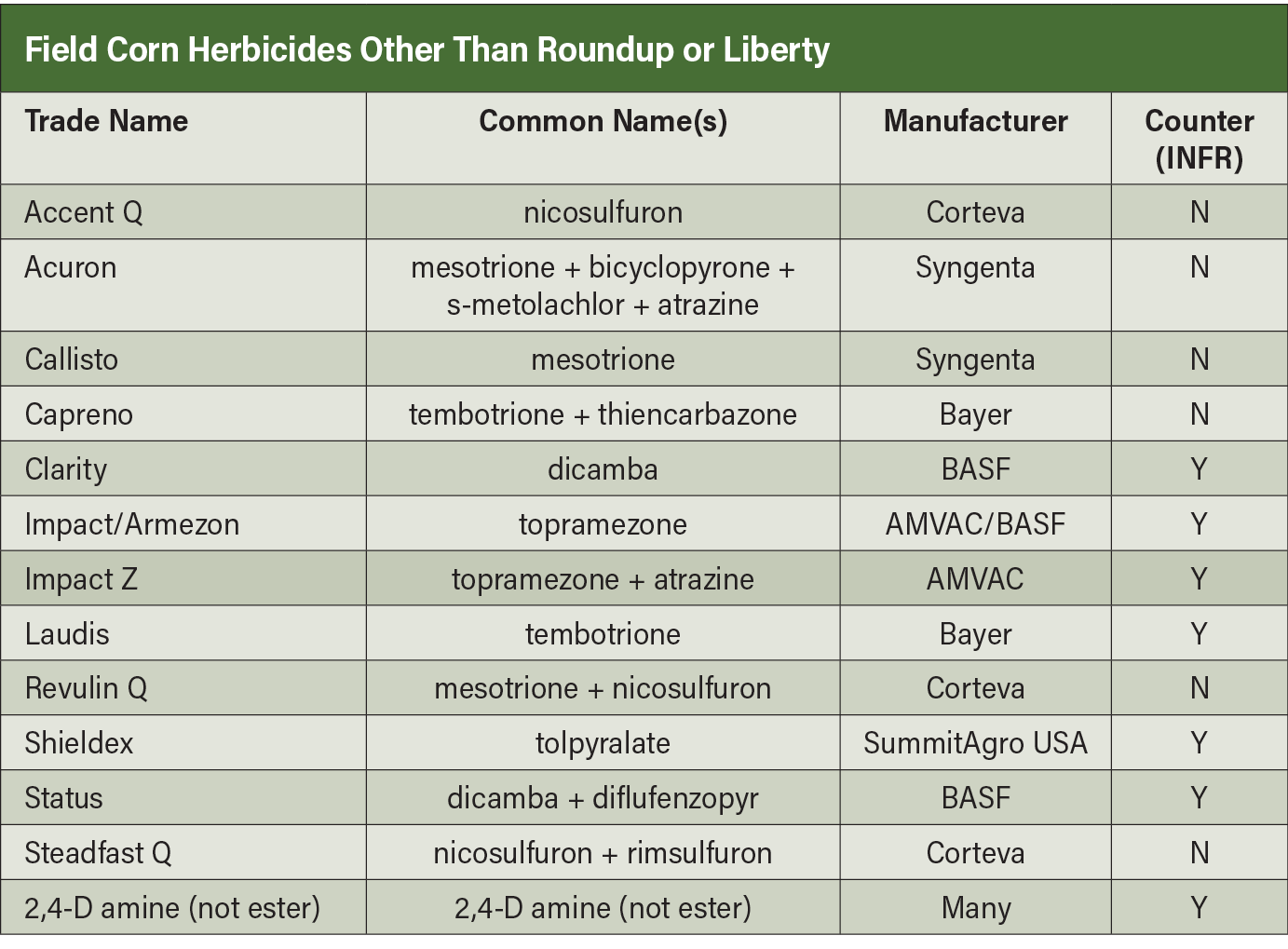 Prostko says, “Roundup-Ready field corn was first commercialized in 1998. Prior to that time, field corn growers were managing weeds in-crop without glyphosate. It might not have always been easy or perfect, but it was good enough to make top yields. Since that time, there have been other herbicides developed for use in field corn.”

Herbicides that have been tested by the University of Georgia and will provide acceptable weed control when applied at the V3-V5 growth stage are shown in the chart. Prostko says these herbicides will need to be tank-mixed with atrazine.

Growers can choose not to use glyphosate, but they should anticipate slightly less overall grass weed control. Herbicides that can be used for residual grass control in field corn include Anthem Maxx, Dual Magnum, Outlook, Prowl (postemergence only), Warrant and Zidua. CS

Some Give And Take

Stiles says there is some “give and take” in other input costs, hinting at a ray of sunshine. 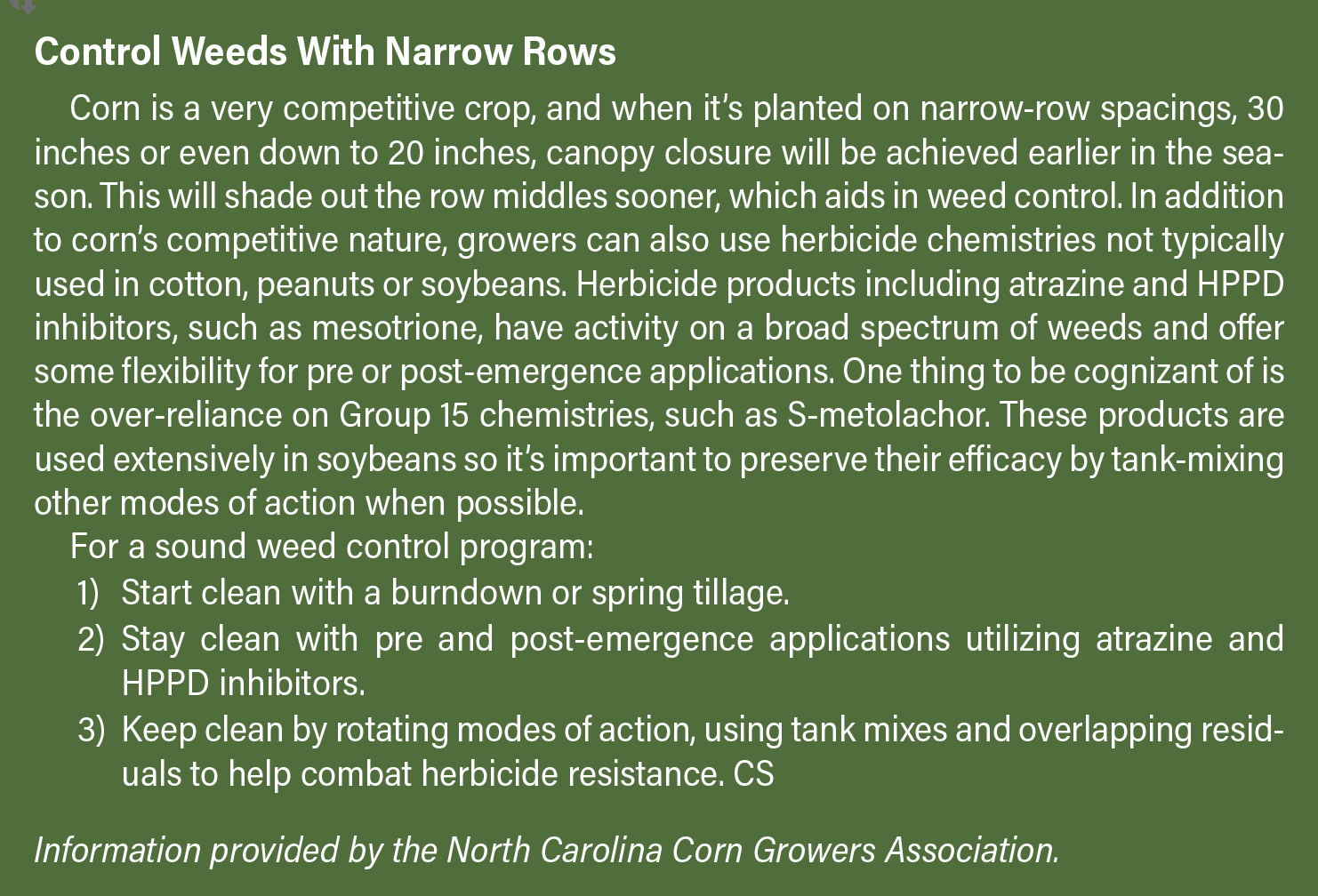 “Some fertilizer prices have weakened in the past month,” he says. “Although, potash prices have remained fairly flat in recent weeks.”

Stiles says prices for urea and di-ammonium phosphate coming through the Port of New Orleans have fallen about 28% and 5%, respectively, since mid-November.

“Changes in Gulf prices doesn’t always translate to the local retail level, but we hear from growers that urea is now being offered at prices below the highs seen in late 2021,” he says. “It’s encouraging to see, but too early to say if it’s the start of a continual trend lower. Historically, we see a firmer price trend in all fertilizer prices from January to March. An extended price decline will generally start sometime in April and extend into late summer.”

Putting A Game Plan Together

If popular herbicides prove too expensive or too difficult to acquire, Butts says growers should fall back on the basics of good crop management. “Weed control is going to take specific, precise management this year. Do the little things, which will add up at the end of the year.

“Some of those things include prioritizing burndown to make sure you start clean so there no weeds already growing at planting and when the crop is trying to emerge,” he says. “Use pre-emergence residual herbicides, because we haven’t seen as big an issue there with supply and prices haven’t gone through the roof to the same degree.”

Portions of the article by Ryan McGeeney, University of Arkansas System Division of Agriculture