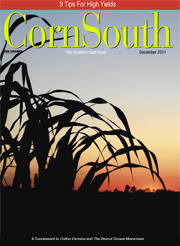 The Southern gold rush took off in a big way as farmers across Mississippi increased their corn acres from 340,000 in 2006 to 930,000 in 2007 and have maintained at least 720,000 acres since. Producers learned a lot that year from the bountiful crop and were encouraged to keep corn in the rotation mix, especially with cotton and soybeans.

However, from 2009 through 2011, challenging weather conditions have often led to discouraging corn yields even in irrigated fields. Now, weed resistance issues are also becoming increasingly important. Despite these scenarios, corn is still a good rotation crop in the South. Two of the main production practices to stay on top of in order to achieve optimum yields are irrigation timing and effective weed control strategies. Before tossing out your corn head in 2012, consider implementing these Top Nine Tips recommended for producing a healthy corn crop and high yields under Southern growing conditions.

1. Don’t take the yield penalty: One of the most significant inputs affecting crop productivity is implementing a planned rotation system. Corn growers in the Mid- South have traditionally planted corn in rotation with other primary crops, such as cotton and soybeans. Thus, the value of rotation to our corn production systems may be under-appreciated. Research consistently shows corn productivity at least 15 percent or 10 to 30 bushels per acre lower when grown continuously, compared to a crop rotation. Furthermore, continuous cropping also substantially increases the likelihood of disease infection, weed competition and insect infestation, which will cut yield level or increase management expenses. Thus, I strongly discourage growing corn in the same field for more than two consecutive years in Mississippi.

2. Choose seed treatments carefully: We have found substantial insect damage during early vegetative stages in corn verification fields during the past several seasons. Plant damage has occurred, despite the presence of insecticide seed treatments. Sugarcane beetles have caused many problems in the hills, but stink bugs may cause damage also. MSU research has shown the primary commercial seed treatments, Poncho and Cruiser, differ considerably in sugarcane beetle control, with Poncho being more effective. Thus, you need to request seed treatment preferences with seed companies and your dealers as soon as possible.

3. Do your homework on hybrid selection: There is a lot of information available to help pick corn hybrids. University hybrid trials are an extremely valuable resource because they annually conduct open, science-based, third-party performance evaluations of more hybrids than any other resource. This provides a fine barometer for you to judge performance of the multitude of corn hybrids in today’s marketplace. The best choices for your farm may also depend upon hybrid plant characteristics and growth responses. The MSU Extension Service also conducts a corn demonstration program to thoroughly assess corn hybrid characteristics and enhance evaluation of elite hybrids in our diverse cropping systems.

5. Planting precision is critical: The foundation for “plant health” and resultant high corn yields is uniform stands and extensive root systems, where plants have plenty of resources and equal ability to utilize them. These variables are primarily dependent upon the performance, timeliness and execution of the planting process. Variable plant spacing and plant emergence are common stand problems that can affect corn yield potential as much, or more than, actual plant population. The cure for these problems may be simply waiting for soil temperatures and moisture content conducive for quick germination and establishment. Morning soil temperature should preferably be above 55 degrees at planting depth, and soil should be dry enough to avoid seed-furrow compaction. Slow your planter down to promote better seed spacing.

6. Weed resistance necessitates new strategies: Increasing populations of glyphosate-resistant and other herbicide-resistant weed species demand we adapt our corn weed control systems to address specific issues and prevent new ones. This may require you to change crops, implement strategies for a specific weed, plan on multiple herbicide applications and improve your application timing. Mississippi’s increasing Italian ryegrass populations are a huge threat to corn production, because it is extremely competitive with young corn during March and April. We recommend fall residual herbicides, followed by multiple spring postemergence applications to ensure we plant corn in a weed-free environment. In-season weed control should also implement diverse herbicide modes of action to attack weeds.

7. Nitrogen management gets tricky when we have rainy springs: Mississippi’s warm, wet climate can pose considerable issues with nitrogen fertilization, particularly for corn, which is known to be responsive and demand high amounts for optimal productivity. Therefore, optimizing your fertilizer dollars can involve considerable more planning than simply applying a given fertilizer rate. The primary methods we suggest to improve corn nitrogen utilization are using split application timing to limit nitrogen fertilizer exposure and losses when crop demand is low and take measures to minimize volatility potential of urea-based nitrogen sources.

8. What is proper irrigation timing? Proper irrigation scheduling is critically important, and you must be committed to applying water when the crop and soil need it. Corn water demand is highest and most critical for a four-week period from tassel to the dough stage and is much less prior to and after this time. You must also evaluate soil moisture content to properly schedule irrigation – crop wilting is not always a reliable indicator. Many producers establish a schedule based upon calendar date, rather than crop needs. This system of watering every predetermined number of days may work fine when crop water use is highest and it is dry, but will be wasteful and detrimental when crop water demand is lower, such as at the mid-vegetative stages and following the dent stage.

9. Don’t cut the irrigation off too early: When hot, dry weather persists during July, water deficit or premature irrigation termination will accelerate maturity, prohibiting kernels from reaching their full potential size and weight. Although kernels outwardly appear mature and corn water use begins declining at the dent stage, this is far too early to terminate irrigation. Potential kernel weight is only about 75 percent complete at the dent stage. Thus, termination of irrigation at the dent stage can reduce grain yields as much as 15 to 20 percent (30 to 40 bu/A) when hot, dry conditions persist.