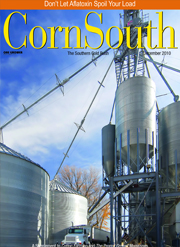 A new product, along with an effort by several universities to align their research, will help remove the fear factor from growing corn. For all corn producers, aflatoxin is the “A” word that everyone fears, and no one likes to talk about. Although the toxin can be found in areas of the Corn Belt, the Mid-South is particularly vulnerable to it because of the region’s hot, humid climate.

According to Mississippi State University Extension Service, “Aflatoxin is a naturally occurring toxic chemical by-product from the growth of the fungus Aspergillus flavous on corn and other crops, such as peanuts and cottonseed. Grain containing aflatoxin is toxic to animals, especially young animals and poultry; therefore, facilities that handle grain routinely test loads before accepting delivery.”

So far, there are no aflatoxin-resistant corn hybrids and, until recently, there really wasn’t anything on the market for corn to provide relief from the aflatoxin scourge. In 2009, Syngenta received a label for Afla-Guard for use in corn. This product is an abiotic strain of aflatoxin that is put out on a de-hulled, de-natured barley seed just prior to tasseling in corn.

Lanclos explains that Afla-Guard is flown on before aflatoxin typically begins to show up. The non-toxigenic fungus (Afla-Guard) sporulates on the surface of the barley carrier upon activation by moisture and establishes itself on the feeding sites of the corn ear where the toxic strain typically tries to get in. By getting the non-toxigenic fungus established on the feeding sites first via the Afla-Guard application, opportunities are greatly reduced for the toxic strain to find a place to go.

Thus, in general, the “bad” aflatoxin levels are then reduced.

85 Percent Reduction Promoted
Afla-Guard does not totally eradicate aflatoxin in a field, but Syngenta is promoting an 85 percent reduction, targeting the 20 ppb number that elevators use to determine if a load of corn is marketable or unmarketable.
Here’s how that scenario works.

For example, suppose a producer had a field of dryland corn and ended up with 100 ppb aflatoxin at the end of the year. If he had applied Afla-Guard on the field and did indeed get an 85 percent reduction, he would have ended up with a 15 ppb marketable crop at the elevator.

However, suppose another producer ended up with 200 ppb aflatoxin. If he had applied Afla-Guard, then he may have 30 ppb, based on the 85 percent reduction assumption, which would still be above the 20 ppb marketable number.

“In the results that I’ve seen,” Lanclos says, “we’re running 85 to 90 percent reduction. We’ve had exactly what we promoted in terms of results in the Mid-South, and we are very excited about that.”

Rejected Truckloads Get Costly
From a farmer’s perspective, Michael Watts, who farms near Clarksdale, Miss., is not consistently in the corn business, but he did grow corn this year.

“We rotate in and out, depending on where the markets are,” he says. “We had about 700 acres of corn on one farm entity, and, of that, we tried Afla-Guard on about 40 acres. At harvest, we were having a lot of trouble with aflatoxin, but when we got into the treated corn, the elevator accepted every truck without any problem.

“Where we didn’t use Afla-Guard, the elevator rejected quite a few of those truckloads,” he adds. “I was running loads 80 to 150 miles to elevators, trying to get them unloaded. It cost me a lot of money. If Afla-Guard does work, and we can get through harvest without having any rejections, the savings to me will be huge.”

In 2011, Watts says he is planning to plant 350 acres of corn and intends to apply Afla-Guard on every acre.

Wants To See Three Years Of Testing
In Arkansas, producer John King has grown corn for the past five years near Helena. This year, he treated all of his 700 corn acres with Afla-Guard.

“We’ve been looking for aflatoxin-resistant hybrids, but nobody seems to have come up with that technology yet,” King says. “We want to grow corn for rotation purposes as well as making a decent income when the prices are good, so we’ve tried to put up with some aflatoxin problems that sometimes have occurred in the past.

“We haven’t delivered much of our corn yet,” he adds. “We usually put it in our grain bins. I took about five samples as the corn was going into the bins, and it showed less than 20 ppb. For us, that’s great news.”

King does point out that this is the first year he has tried Afla-Guard and would like to use it on his farm for three years to verify that it is working like it is supposed to.

“At least we have some sort of tool out there now,” he says. “After two more years of testing it, and I still get this kind of control, then I’m going to be very excited.”

Aflatoxin Mitigation Center Of Excellence
In addition to the introduction of Afla-Guard, there is more good news in the fight against aflatoxin. Tommy Young, who is an Arkansas producer and chairman of the Arkansas Grain & Sorghum Board, is a proponent of the Aflatoxin Mitigation Center of Excellence, which at this time is seeking funding so that the Center can move forward.

“The Center consists of a group of universities and other agencies that are coming together to try to align all of their aflatoxin and mycotoxin research so that everyone is on the same train track going to the same station,” Young says. “We’re looking for a breakthrough so that all U.S. corn farmers will not have to fear having aflatoxin show up in their corn crop.”

Future Looks Promising
In the Mid-South, Lanclos says, “Afla-toxin is the No. 1 issue in terms of limiting our corn acreage opportunity.”

Hopefully, as farmers continue to try Afla-Guard over the next few years, and the Aflatoxin Mitigation Center of Excellence takes off, corn farmers can take marketable loads of corn to the elevator with the confidence that they will not be turned away.