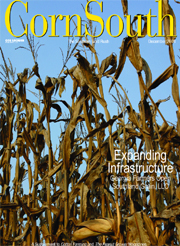 It may be the land of “fruits and nuts,” but driving through California’s countryside these days is almost reminiscent of a leisurely stroll down a dirt road in the Southern states. The corn is as thick as an elephant’s hide. High prices for corn have significantly altered California’s agricultural landscape in the past few years, and that is not likely to change anytime soon.

Corn for grain production in California in 2008 is expected to total 1.08 million tons, up eight percent from last year, according to the USDA National Agricultural Statistics Service. Harvested acreage for 2008 is up eight percent totaling 215,000 acres, and the yield forecast of 5.04 tons per acre is unchanged from 2007. That’s a significant increase from the 110,000 acres of corn harvested for grain in the state in 2006.

Corn prices are projected to rise through 2009-2010 as increases in ethanol production strengthen corn demand, according to Agricultural Baseline Projections from the USDA Economic Research Service.

“We are excited to celebrate this milestone with the community,” says Neil Koehler, Pacific Ethanol’s president and CEO. “The start-up of our Stockton plant marks the achievement of our goal of 220 million gallons of annual production capacity and dramatically increases the availability of renewable fuels produced in the state of California.”

The Stockton facility, which is capable of producing 60 million gallons of ethanol per year, has access to water, rail and road transportation within close proximity to over one million dairy cows within the state. The company will provide a local market for wet distillers’ grains and other ethanol co-products and process 21 million bushels of corn per year, producing ethanol and 500,000 tons of WDG annually for the use by local dairies for feed products. “Ethanol reduces carbon dioxide emissions by up to 40 percent compared to conventional gasoline,” says Pacific Ethanol’s chairman Bill Jones. “That, along with the boost to the local economy through economic investment, job creation and environmental stewardship, creates a long-term benefit for the region.”

Pacific Ethanol Receives Energy Efficiency Rebates
“This facility will support our local farmers by utilizing corn from the local region,” says California Agriculture Secretary A.G. Kawamura. “It will also produce 500,000 tons of wet distillers’ grain to be used by local dairies for high protein feed. That’s good for the environment, our farmers and helps with our energy security.”

State officials, as well as energy companies, are betting on the increased need for energy conservation in California in the future, and they’re putting their money on the table to finance it. Pacific Gas & Electric gave Pacific Ethanol $642,000 in energy efficiency rebates for the use of “green” energy technologies to build the new facility. Those “green” technologies include efficient lighting, motors, heat recovery devices, insulation and other energy saving measures.

It’s estimated that the new facility will provide annual energy cost savings of approximately $1.3 million with a reduction in greenhouse gases by 771 tons.

Brenda Carol is a freelance writer based in California. Contact her at (805) 226-9896 or brenda@brendacarol.net.