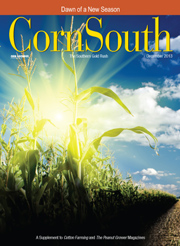 Even though corn production and carryout increased compared to the last supply and demand estimates in September, both these numbers came in below the average pre-report trade guess. December 2013 corn closed up 6¼ cents on Nov. 8 in response.

On the use side of the ledger in 2013/2014, feed use is up 100 million bushels and exports +175 million. Fuel use was unchanged. The net change in ending stocks is an increase of 32 million bushels but a slight decline in the stocks-to-use ratio from 14.64 percent in September to 14.57 percent currently.

In addition to the larger U.S. crop, foreign corn production increased 2.46 mmt (97 million bushels) in the November WASDE, most of that coming from the FSU-12. World corn supplies were expanded by a +12.3 mmt increase in beginning stocks as well. Corn use increased 5.5 mmt and ending stocks increased by 12.9 mmt. The estimated days of use on hand at the end of the marketing year now stands at a 64.3 day supply of corn, up from 59.6 last month and just above the 10-year average of a 60-day supply.

There was strong payroll growth in October – 204,000 jobs added – despite the government shutdown. Historical revisions added a combined 60,000 to August and September, and the three-month moving average jumped to 202,000 from 163,000 in September. The unemployment rate increased very slightly and now rounds to 7.3 percent instead of 7.2 percent, with only a minor contribution from furloughed government workers. The better-than-expected report puts the spotlight back on the Fed’s December meeting; tapering at that point now appears more likely than it did last week.

The advance estimate of third-quarter real GDP growth was 2.8 percent – also above expectations. Most of the gap was traceable to inventories. Consumption growth slowed from 1.8 percent to 1.5 percent, while government spending was not a drag on growth (as had been expected). The central question for the fourth quarter is what share of these inventories was unplanned and likely to reverse. We still expect growth to slow to below two percent, as the shutdown and debt ceiling debate subtract more than half a percentage point in the fourth quarter.

Looking ahead to the 2014 crop, some early projections of total use in the 2014/2015 marketing year are about 13.2 billion bushels, up from 12.95 in the current marketing year. At a trendline yield of 160 bushels per acre, any planted acre number above 90 million would add to ending stocks and put downward pressure on prices.

On Oct. 18, Informa Economics issued its forecast of 2014 corn acres at 91.7 million. With what looks like a downward trend in prices ahead, I am ready to price my first sales of 2014 on price strength this winter.