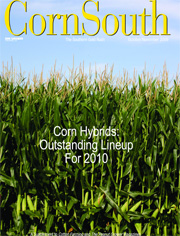 Seed treatments are often the first line of defense between young corn seedlings and diseases and insects lurking out in the field hoping to catch the vulnerable plants without any protection. For this very reason, the use of seed treatments is pretty much standard operating procedure in the Southern corn-growing region.

Jason Kelley, University of Arkansas Extension corn specialist, says if you just ordered corn, it’s a common practice for it to be treated with a fungicide plus an insecticide.

“When conditions are really tough, it’s a no-brainer that you should have fungicides and insecticides on the seed,” he says. “You’re protecting what your yield potential could be.”

Dewey Lee, with the University of Georgia Extension Service, agrees with Kelley.

“All of our corn is treated in some form or fashion,” he says. “Much of it is treated with an insecticide, such as Poncho or Cruiser, typically at the low rate.”

Lee notes that the fungicides used in treating seed are there to protect the seedling’s health while it’s growing through some very stressful conditions.

“It takes a while to get the plant established in the early part of the season down here,” he says. “The fungicides used may vary depending on the pathogens from which the plant needs to be protected.”

And Abamectin Makes Three
For 2010, Syngenta is offering another option for treating corn seed by bringing Avicta Complete Corn to the market. This product is similar to Avicta Complete Cotton as it contains the same active ingredient – abamectin – which is a non-systemic contact nematicide that targets all of the early season nematode species, including root-knot nematode.

Avicta Complete Corn will also contain a 500 rate of Cruiser, instead of a 250 rate.

“Avicta Complete Corn has a more potent insecticide package, and the nematicide package really differentiates it from anything else on the market,” says David Long, technical crop manager with Syngenta Seed Care.

Darrin Dodds with Mississippi State University (MSU) Extension notes that nematode problems are sometimes difficult to identify because they don’t have the presence of a weed or an insect.

“Many times you don’t know you have a problem until you see a stunted stand of corn that doesn’t yield as well,” he says.

Although most of the university systems have only been working with Avicta Complete Corn for two years, MSU entomologist Angus Catchot says he sees promise in the higher rate of Cruiser that comes in the new seed treatment.

“When it comes to corn, it is very disheartening to find soil insects because once you get past the seed treatment stage, there is no rescue treatment to turn to,” he explains. “So moving the rate up to the 500 level is definitely going to help corn producers not only in Mississippi but throughout the Mid-South.”

Dodds adds, “The overall goal of corn seed treatments is to establish a stress-free crop and help it grow off to make the best yield possible.”