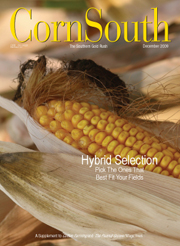 As noted by the University of Florida (UF) Extension Service, “Growers have only one chance to make the right decision on the right corn hybrid to use each year.” Obviously, it’s not a one-size-fits-all situation. Many variables come into play on each producer’s farm, often changing from field to field.

To help Southern corn producers in making hybrid selection decisions, each university has a “corn production” section on its Extension Web site with helpful information pertinent to individual states. Following are excerpts from some of these sections. To obtain additional information, visit your state university’s Extension Web site to view the complete contents of its Corn Production Guide.

The university also notes, “Hybrids with transgenic and value-added traits are available from many corn seed companies. These types of hybrids include Bt insect resistant hybrids and those with resistance to herbicides such as Roundup, Liberty and IMI (imidazolinone). High-oil content corn hybrids are also available for planting in the Southeast. Because they are priced higher than conventional hybrids, these hybrids should be used only where the specific trait is of economical benefit.”

In the Deep South, it’s important to pay close attention to the hybrid’s disease resistance package.

“Higher humidity, fluctuating water availability and higher plant populations under irrigation will favor many diseases,” UF notes. “Hybrids should have resistance to Southern corn leaf blight, anthracnose, grey leaf spots, common rust, southern rust, etc. Corn planted after corn is especially susceptible to leaf diseases, since there is a buildup of spores throughout the growing season. Bt corn that could survive later planting due to insects could fail to produce grain due to little disease resistance. Grain quality depends on shuck coverage to retard moisture and inhibit insect penetration into the ear and grain hardness.”

Consider Genetic Differences
The University of Georgia (UGA) Extension Service reminds farmers to keep the characteristics that best fit their farm in mind when selecting hybrids for planting.

“The right choice of hybrids for any production system is crucial since large gene-tic differences exist for the many traits of yield,” UGA says. “Hybrids for irrigation should have the genetic potential to perform at high plant densities and respond to water and other inputs, such as increased fertility. Hybrids with strong stalks and roots are needed under higher densities and yield levels to allow the corn crop to dry down with minimal harvest loss due to lodging. Higher populations suggest the need for a hybrid that can take the crowding and still maintain stalk quality and ear development. Dryland hybrids require good stress tolerance with good grain quality. Companies that sell hybrids generally makes distinctions between hybrids that perform better under one production system or another.

“Hybrids with high-grain quality at harvest are necessary to provide a better market for the crop. Grain quality depends on resistance to ear rots and other pests. Good husk cover to retard moisture and insect penetration minimizes damage from subsequent development of ear or kernel diseases. In addition, hybrids with higher grain quality typically weather better during dry down.”

UGA goes on to point out that corn hybrid maturity determines how well a hybrid will fit into a production program. Hybrids are classified as early (short-season), medium (mid-season) or late (full-season) maturity.
“Early and medium-maturing hybrids are usually better adapted to irrigated production than dryland production because they mature two to three weeks earlier, generally grow shorter and are less subject to lodging, may need fewer irrigations because of their shorter season and are more suitable for use where large acreages may require a harvest spread to improve harvest efficiency. If the farm work load normally prevents harvesting early to medium-maturing hybrids within 30 days after physiological maturity (black layer), consider planting a later-maturing hybrid.”

UGA Extension also has created a table that lists current selected single and stacked transgenic corn with Bt traits for caterpillar and/or mid-season rootworm control in Georgia for 2010. To view the table, go to www.caes.uga.edu/commodities/fieldcrops/gagrains/corn.html.

MSU Extension says, “The corn hybrids noted in the ‘Corn Short List’ have produced superior grain yields in Mississippi, according to results published in the MSU Corn for Grain Variety Trials and surrounding states. Suggestions are separated into dryland and irrigated culture. Hybrids are categorized according to the number of years evaluated in the MSU Corn for Grain Hybrid Trials: ‘Standard’ hybrids have been tested for two years or more, and ‘New’ hybrids have been tested one year.

“Growers should realize that environmental variability in a given year or location may substantially affect hybrid performance. In other words, hybrids which have performed well for many years and at various locations should be more likely to perform well in the future. Thus, growers would be advised to plant the majority of their acreage to hybrids with established track records, such as the ‘Standard’ hybrids and test ‘New’ hybrids on a limited acreage.”

MSU continues by commenting on other factors, “Producers should also evaluate maturity and stalk strength before selecting a hybrid. Furthermore, several hybrids with complementary characteristics should be selected in order to spread risk and minimize loss due to an unpredictable problem, which one hybrid may be susceptible.”

Arkansas Weighs In
The University of Arkansas (U of A) Extension Service notes that yield is an important factor, but maturity, stay green, lodging, shuck cover, ear placement, disease and insect resistance also play a role in hybrid selection. In Arkansas, 112- to 120-day maturity hybrids usually produce the highest yields.

“Farmers with a relatively large amount of rice may use 108- to 110-day hybrids and sacrifice a few bushels of corn so they can pick corn prior to rice harvest. Hybrids that stay green later into their maturity usually retain better stalk strength and have less lodging potential. Shuck cover is important since good ear coverage means less potential for kernel damage. Ear placement is important in corn planted later in the season.