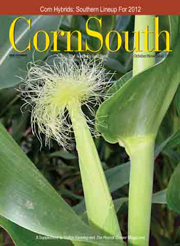 This week’s Crop Progress reported an improvement in the condition of the U.S. corn crop for the first time in over a month. The crop condition index rose to 337, up three points from last week’s 334. USDA revised its 2011 yield estimate in Monday’s WASDE, lowering the yield from 153 in August to 148.1.
Trade expectations going into the report were for a yield of 148.8. This year’s condition ratings and yield estimate are consistent with the corn crop of 2005, the last time crop condition index scores were this low.
The lower yield number in the September WASDE reduced the estimated size of this year’s corn crop from 12.914 billion bushels in August to 12.497 billion.

However, even with lower production than the trade expected, estimated ending stocks were above trade guesses. USDA cut corn use in every category but food: Feed, -200 million; ethanol, -100 million; exports, -100 million. Ending stocks were reduced by 42 million bushels to 672 million, but the trade was ready for a number closer to 636 million. The stocks to use ratio now stands at 5.3 percent, down from 5.4 percent in August.

World Ending Stocks
World corn supplies were lowered as well in the September WASDE, by about 4.5 mmt (+1.4 mmt beginning stocks, -5.9 mmt production). But this was offset by a reduction in use of 7.3 mmt, mostly feed. The result is an increase in world ending stocks of 2.9 mmt and an increase in the days of use on hand at the end of the marketing year from 48 to 50 – a little more cushion to what is still a very low number.

Banking Activity
Financial markets registered gains this week as five central banks in the United States, Europe and Japan offered loans to major European banks to assure that they can meet their daily financial obligations. These private banks were having difficulty borrowing from other financial institutions because of the level and risk of Greek debt held by these banks. Greece still has to meet financial goals by the end of September in order to qualify for the next round of bailout funds and avoid default on its debts.

The Bureau of Labor Statistics released August inflation numbers on Thursday. Prices for all items are up another 3.8 percent from a year ago. The increase for core inflation, all items less food and energy, was up two percent.

China’s central bank has taken efforts to curb inflation over the last several months with some success shown in August. The inflation rate for all items in China slowed from 6.5 percent to 6.2 percent. Food inflation is still running at 13.4 percent. Efforts to trim inflation by slowing the rate of growth in the Chinese economy threatens to lessen demand for U.S. exports.

Market Strategies
My final sales trigger of 2011 was met on Tuesday when the nine-day moving average fell below the 18-day on a market close of $7.23. Along with the moving average decline, we had broken the upward trend line and just come off a key reversal. My pre-harvest sales are complete with the final portion to be sold at harvest.