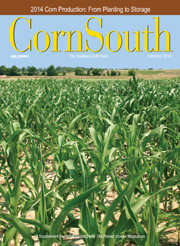 Last year, in some cases, corn that was harvested in Mississippi was what could generally be considered high-moisture corn. Some farmers received a premium by harvesting high-moisture corn and taking it straight to the elevator.

However, managing high-moisture corn is not easy since corn that goes directly into on-farm storage needs to be quickly dried to less than 15% moisture (24 hours or less). Drying corn reduces the likelihood of fungal growth on the corn in storage.

Corn placed into grain storage at moistures above 15% can begin to grow fungus if heat and air flow are not constant. In some instances, electricity that was being used to run driers stopped after grain was placed into storage. In as little as 24-36 hours, the corn on top developed a green fungal growth.

Remember, once drying and heating are continued after that period, the fungus doesn’t disappear. The fungal spores that produced the green fungus are still present and can begin to grow again if a conducive environment reoccurs.