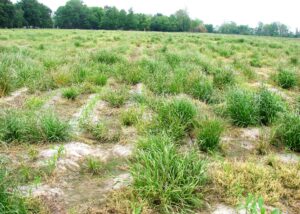 Ryegrass is one of the most problematic weeds when it comes to burndown.

Weed management is a year-round job, but producers take special care to make sound management decisions prior to planting— including cover crop burndown.

David Russell, an Alabama Extension weed scientist, offers suggestions for planting into a weed-free field and maintaining a clean corn crop throughout the growing season. His areas of specialization include corn, soybeans, small grains, forages and non-crops.

“When you think about the time of year we begin planting corn, producers will deal with cool-season annual and perennial weeds,” Russell said. “The majority of the questions I receive are about annual ryegrasses. It probably tops the list as the most problematic.”

Corn is a grass crop. In many growing situations, this can create an issue for producers trying to control weeds in a field. Russell said one of the most difficult parts of his job is removing grassy weeds from grass crops.

“When producers are choosing herbicides to control grassy weeds, there are not a lot of selective options that can target one grass and remove it from the grass crop,” he said.

“If annual ryegrass escapes a herbicide application it has the ability to hybridize and develop resistance,” Russell said. “Over the years, the plant’s genetic makeup changes. This mutated grass becomes very difficult to control because it has to resistance to any herbicide that has been applied to it in the past.”

Russell said one of the biggest challenges producers face is the potential for resistance to develop. Since there have not been new chemistries released in recent years, Russell encourages producers to practice stewardship and integrated pest management practices.

Many cool-season weeds begin germinating and establishing during the fall. Russell encourages producers to begin the weed management process during the fall months.

“I like to encourage producers to catch the weeds when they’re small and actively growing. A lot of times, this is during the fall,” he said. “Thinking back to the winters of 2019 and 2020, it was really wet with record rainfall across the Southeast. There were many situations where producers could not get into the field to do their fall burndown.”

For this reason, producers saw huge explosions of problematic weeds, such as annual ryegrass, during the spring. This prevented a lot of early planting.

There are several chemistries available for producers. However, these same chemistries also have resistant populations. Again, Russell emphasizes the importance of proper usage of these chemistries to help preserve their effectiveness.

Most acres in Alabama are getting a pre-plant herbicide application. Recent research indicates a measurable drop in yield in fields where burndown did not occur within three to four weeks ahead of planting.

“Research out of the Delta regions of Mississippi and in Tennessee has shown a decrease in yield of one to two bushels per day in fields where burndown did not occur close enough to planting,” he said. “We are really suggesting that growers make burndown applications in time for weeds like annual ryegrass to be dead three to four weeks prior to planting.”

Reasons are two-fold. Annual ryegrass does have allelopathic effects. This is a built-in mechanism to keep other weeds from growing around it. Another consideration is the competition effect.

For the most troublesome weed in corn, the winner is …

Soil sampling is most reliable way to confirm nematodes in fields