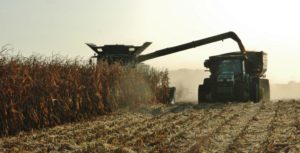 Corn producers in Texas may fare better than other parts of the country due to uncertain crop conditions in the nation’s Corn Belt — Texas A&M AgriLife photo by Dr. Jourdan Bell

Corn and sorghum prices have rallied in response to weather-related problems in the Corn Belt, but their future remains uncertain, according to a Texas A&M AgriLife Extension Service expert.

“Prices are higher than they’ve been in three to five years,” he said. “At this point, producers along the Gulf Coast and Central Texas have a good handle on their yield expectations, and prices have rallied due to concerns about the crop potential in the Corn Belt. So right now, things look positive for Texas grain producers.”

Welch said per-bushel corn futures prices rose $1, from $3.65 to $4.65, between late-April and early June, based on reports coming out of the major corn-producing areas in the United States.

The U.S. Department of Agriculture’s June 28 report estimated corn acres to be just under 92 million compared to early season surveys, which showed producers intended to plant around 93 million acres of corn. Pre-report trade expectations were for a corn acreage number between 85 million-89 million.

Welch said prices dipped following the June report but rebounded as experts agreed it was likely incomplete and more acres failed or were not planted. Another USDA report in mid-August should clarify acres that failed, were not planted or were planted late.

“The acreage number is a real question mark, but so is the yield potential of this year’s crop,” he said. “There’s concern about late-planted acres going into the silking and pollinating stages during August, which is typically hotter and drier. That’s not the time you want corn going into temperature- and precipitation-sensitive stages that could negatively impact yields.”

The uncertainty about the yields in the Midwest, even if the planted acreage is lower than expected, could still be a factor for up or down swings in future prices, Welch said.

He said an end to the trade dispute with China would further improve an already positive market for Texas sorghum producers. China was the top destination for Texas sorghum, and its exit from the market has hurt prices.

“Opening trade would be significant,” Welch said. “It would change the dynamics of the sorghum market, especially for Texas producers who can access ports like Houston and Corpus Christi more cheaply. But more broadly, opening trade would change the dynamics in the grain complex, especially as soybean profitability impacts corn acres in the long term.”

Despite the trade dispute and early season problems for Texas corn and sorghum producers, Welch expects them to have good pricing opportunities into the fall.

“The pendulum swings on uncertainty, but we do know Texas conditions are looking good,” he said. “The Panhandle has good moisture, and so in Texas specifically prospects are positive compared to last year.”