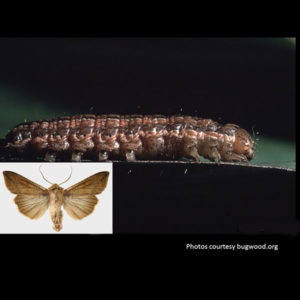 Milder than normal winter temperatures allowed stink bugs and grasshoppers to survive and thrive this spring.

“The stinkbugs were heavy in wheat,” she says. “Once the wheat is harvested, they move into corn to begin feeding. There are also decent numbers of brown marmorated stink bugs.”

Kesheimer says corn is most vulnerable to stink bug damage pre-tassel, although the crop can be damaged throughout the season. Stink bugs tend to be concentrated around field edges, so when scouting make sure to walk into the field to inspect a larger area. Pay special attention to areas near corn that stink bugs may move from – freshly cut wheat, weeds or tree lines.

Grasshoppers, similar to stink bugs, are an edge pest.

“If present in high numbers, it is important to control the nymphs before they get larger or cause too much damage,” Kesheimer says. “They can wipe out a field quickly and without warning. In times of drought stress and if significant defoliation is occurring, treatment may be warranted. Several insecticides will control grasshoppers.”

Each farmer will deal with different levels of pest pressures depending on their location.

Fall armyworms have already been found in treatable populations in Washington County, Alabama.

Kesheimer says it is crucial that producers scout their grasses using sweep nets to detect any fall armyworm populations while they are still young. Hot, dry weather like much of the state is currently experiencing creates favorable conditions for fall armyworms, so producers should be prepared.

Young caterpillars don’t eat much food and therefore don’t cause much damage. However, if a population goes undetected, it can seem as though they appeared overnight. They are bigger, harder to control with insecticide, and have the potential to cause substantial damage.