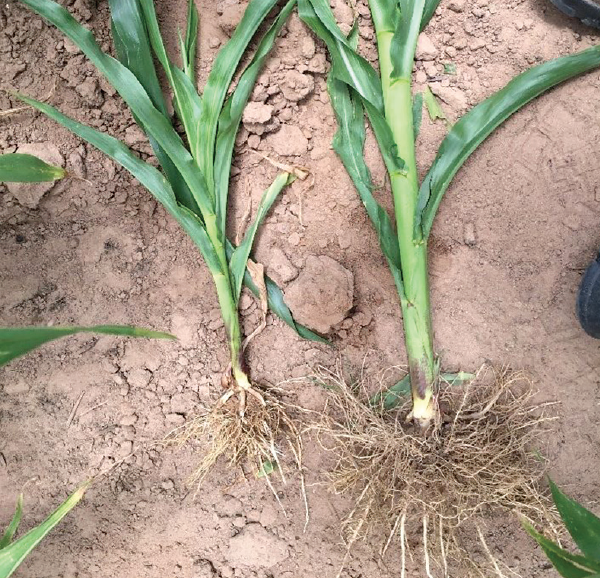 As you study field notes from last season and prepare for corn planting in 2018, the following information on burndown, nematodes and root limiting soil conditions may also be beneficial in maximizing crop potential.

Burndown Considerations
When burning down fields near planting, herbicide selection and rate and spray coverage are very important to ensure complete control. If mare’s-tail, henbit, cutleaf evening-primrose, and sowthistle are present, be sure to apply 2,4-D at one pound of acid equivalent per acre. In many instances, when weed control is unsatisfactory from spring burndown, it is because 2,4-D rates that were too low or 2,4-D was not applied at all.

Applying a burndown four to six weeks prior to planting gives plenty of time for weeds to die and break the “green bridge” and for soil residual herbicides, if applied, to keep fields weed-free until planting.

The main goal of any burndown operation is to be weed free at the time of planting. Choice of fall or spring burndown will depend on what crop you intend to plant, if Italian ryegrass an issue, and if soil and bed erosion a problem. Spending more money than necessary is a big concern when deciding on burndown.
Information by Josh Copes, Daniel Stephenson, and Donnie Miller, LSU Ag Center.

Corn Nematodes, Silent Thieves
Field and sweet corn are good hosts for the southern or cotton root-knot nematode (Meloidogyne incognita Race 3). This is the same root-knot nematode that has plagued Alabama cotton and soybean along with some vegetable producers for generations. Based on a recent Alabama study, cotton root-knot nematode can reduce expected corn yield by 30 percent. Available corn hybrids have also proven to be an excellent bridge hosts for maintaining high populations between cotton crops. Yield gains from nematicide treatments in field trials have consistently been in the 10 to 18 percent range, which suggests that the 30 percent loss value may be real because no nematicide gives 100 percent yield protection.

Stubby root nematode is a damaging early season pest in seedling corn. Irregular patches of stunted corn with off-color foliage and stubby roots that does not respond to nitrogen are typical symptoms of stubby root damage. Yield losses due to stubby root are in the same range as those reported for cotton root-knot.

Recent trials have focused on the efficacy of the seed treatment nematicide products Avicta Duo Corn and Poncho VOTiVO as well as the insecticide/nematicide Counter 20G for the control of cotton root-knot and corn yield response. While sizable yield gains from Avicta Duo Corn have been recorded, recent Alabama trials have failed to show yield gains with either of the above nematicide seed treatments. In contrast, the granular insecticide/nematicide Counter 20G has consistently returned yield gains up to 20 and 30 bushels per acre in stubby root and/or cotton root-knot infested fields, respectively, in multiple Alabama studies. Root Limiting Conditions
The era of remote sensing and aerial drones has most producers focusing on visible issues. However, the root of most problems is actually roots, or lack thereof. The yield potential of all agricultural crops can be traced back to the soil. Soil conditions that limit root development and proliferation throughout the topsoil and subsoil, ultimately limit the yield and long-term sustainability of the field.

The cause of soil compaction or densification can be due to multiple causes including tillage and vehicle traffic on moist to wet soils, loss of rooting development due to low phosphorus and/or low general soil fertility, low pH, high sodium and/or high soil salinity. As root proliferation declines in a soil, the soil, specifically the non-tillage subsoil, slowly increases in density. Under ideal growing conditions, the constant turnover of root system regenerates the macro-pores in the soil, plus helps maintain natural soil aggregation through the plant/microbiological relationships. As a root system decomposes, the resulting soil voids allow for rapid exchanges of gases and movement of water, plus provides a conduit for future root development. Lacking these voids or macro-pores, poor oxygenation of the root system often occurs, plus standing or increased runoff of rainfall or irrigation water is observed.

Key strategies toward avoiding compaction are to: 1) reduce axle loads when-ever possible, 2) avoid tillage or movement of equipment when soils are moist or wet on the surface and deeper in the profile, 3) Use controlled wheel tracks, thus limiting the overall percent of the field that large axle/wheel loads impact and 4) ensure other soil fertility related limitations are resolved. The tillage and wheel traffic on moist and wet soils is often the more immediate and most obvious form of compaction. This wheel traffic compaction is often associated with shorter plants nearby and also immediate ponding during rainfall events.

The first step for remediation of compaction is to determine where and to what extent a field is compacted. Yield monitors and visual observations can provide some insight into potential areas of compaction, and a soil probe used to collect soil samples can be used to evaluate ease of penetration, depth of hardness layers and changes between areas of the field. When compacted areas are noted, a further understanding of the compaction depth is needed. Longer soil probes or soil penetronometers can be utilized to evaluate the depth of compaction. Most compaction problems can only be reduced by mechanical means, including deep ripping, chiseling or other fracturing of the soil when dry. Another approach is to plant a taproot type of cover crop. Select legumes, including sweet clover, are uniquely adapted to penetrate compacted layers, but may require multiple plantings.