Relatively low disease has been observed in Tennessee so far. The warmer winters most areas had may have allowed survival of disease inoculum and paired with storms coming from the south could result in more disease development this season. So scouting and correctly identifying diseases are important.

Whether a disease will develop and cause economic loss depends upon multiple factors including:

Foliar fungicide applications in corn is more likely to provide a response in yield when disease is present or there is significant risk of disease, weather conditions favor disease development, the field is corn after corn, and a disease susceptible hybrid is planted.

Research data from University of Tennessee and other universities has continuously found these factors to strongly influence the magnitude and consistency of yield response to a foliar fungicide application in corn.

Major corn diseases are favored by humid conditions, so the edges of fields will not be the place to scout. Within fields, especially low spots that hold moisture are good areas to scout for disease as it may develop in those areas first. 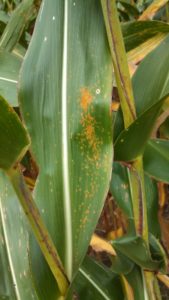 Image 3. Southern rust on upper side of corn leaf

Be on the lookout for lesions and use the resources on UTcrops.com and particularly under Corn Diseases in the photo gallery (Corn Diseases in Tennessee), which contains disease images and weather conditions that favor disease development (soon to be uploaded into the mobile friendly field guide site – guide.utcrops.com).

For you tweeters out there, tweet a picture of any corn diseases you’re seeing, the disease name, and county and state to @corndisease.

One of the most common foliar corn diseases in Tennessee is gray leaf spot (caused by a fungus – Cercospora zea-maydis), especially in continuous corn fields (see Images 1 and 2). 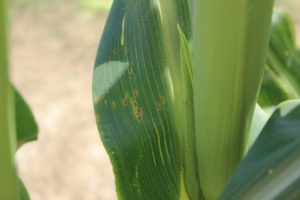 While southern corn rust is the one of the most damaging diseases, be sure it is correctly identified and not confused with common rust. The characteristics that differ between the rusts are the location, color, shape and distribution of pustules (see Table 1 and images 4 and 5).

When in doubt don’t hesitate to contact your local county agent for advice on disease management and identification.

The response in yield to break-even on fungicide application can be found in Table 2.

Using a wide net of break-even scenarios based on past average corn prices and $12 to $36 application costs the table shows bushels per acre response that would be required to recover the cost of the fungicide application. 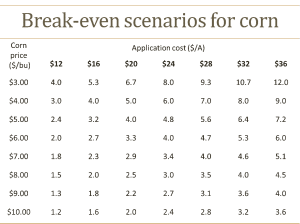 There are multiple fungicides labeled for corn and for the management of different diseases. The multistate collaborative, the Corn Disease Working Group (CDWG), has developed information on fungicide efficacy for control of certain corn diseases.

This corn fungicide efficacy table can be found at UTcrops.com (Corn Fungicide Table – CDWG) and linked here as well.

Application coverage is also important, which includes using sufficient amount of water per acre and adequate droplet size based on the product being applied.

Heather Marie Kelly is a University of Tennessee Extension plant pathologist. She may be reached at youngkelly@utk.edu

What are your options for ryegrass escapes in planted fields?

Post-cold snap for beans and corn