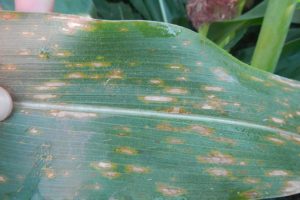 Corn producers have the greatest chance of controlling foliar diseases and improving the crop’s stalk strength when foliar fungicide treatments are applied at the tasseling (VT) growth stage, according to a University of Kentucky study.

“Foliar diseases like gray leaf spot and southern rust frequently appear after tasseling and into grain fill. This prompts farmers and agribusiness personnel to ask if these late symptoms are causing yield loss, and if late fungicide applications are warranted for disease management and to improve standability,” said Kiersten Wise, Extension plant pathologist in the UK College of Agriculture, Food and Environment. “Understanding the relationship between fungicide timing and the influence of foliar diseases on stalk quality and standability helps us more fully understand how to maximize profitability of fungicide use in corn.”

Researchers applied foliar fungicides to each hybrid at either tasseling (VT), blister (R2), milk (R3) or dough (R4) growth stages. Wise rated disease severity in the plots as the plants reached the dough stage and assessed stalk strength as percent lodging, when the crop reached maturity. She collected yields, grain moisture and test weights from the plots.

In 2018, fungicide timing reduced disease severity and lodging in both hybrids. That year, Kentucky had low to moderate levels of gray leaf spot. While all fungicide-treated plots had less disease than the control, Wise found that the plants sprayed at tasseling had the lowest levels of disease. The plants that had fungicide treatments at tasseling also had a lower percentage of lodging than treatments applied at other growth stages.

The hybrid with the stronger stalk rating had a lower percentage of plants lodging than the hybrid with a medium stalk strength. Lodging increased with each later fungicide application, and foliar fungicides applied at the dough growth stage did not reduce lodging compared to the experiment’s control.

“This shows us that late-season fungicide applications do not improve stalk strength,” she said.

No effects on yield

While fungicide timing impacted disease severity and lodging, it did not affect yields.

“This is likely because disease severity was not high enough in the trial in 2018 to reduce yields,” Wise said. “The control had less than 5% disease severity. In low disease pressure years, yield increases from fungicides may be less likely to occur, and farmers may not see consistent economic returns from those applications.”

“This study shows that choosing hybrids with good stalk strength ratings reduces lodging, and planting corn during the recommended time frame continues to be the best way for producers to improve their likelihood of achieving maximum yield potential, even in years with moderate disease pressure,” she said.

Wise said they need additional research in a year with high disease pressure to confirm the consistency of fungicide timing’s impact on stalk strength, yield and disease pressure.

disease university of kentucky 2020-05-12
Vicky Boyd
Share !
Previous: Scout seedling corn for stink bugs
Next: Got hog damage? There’s an app for that