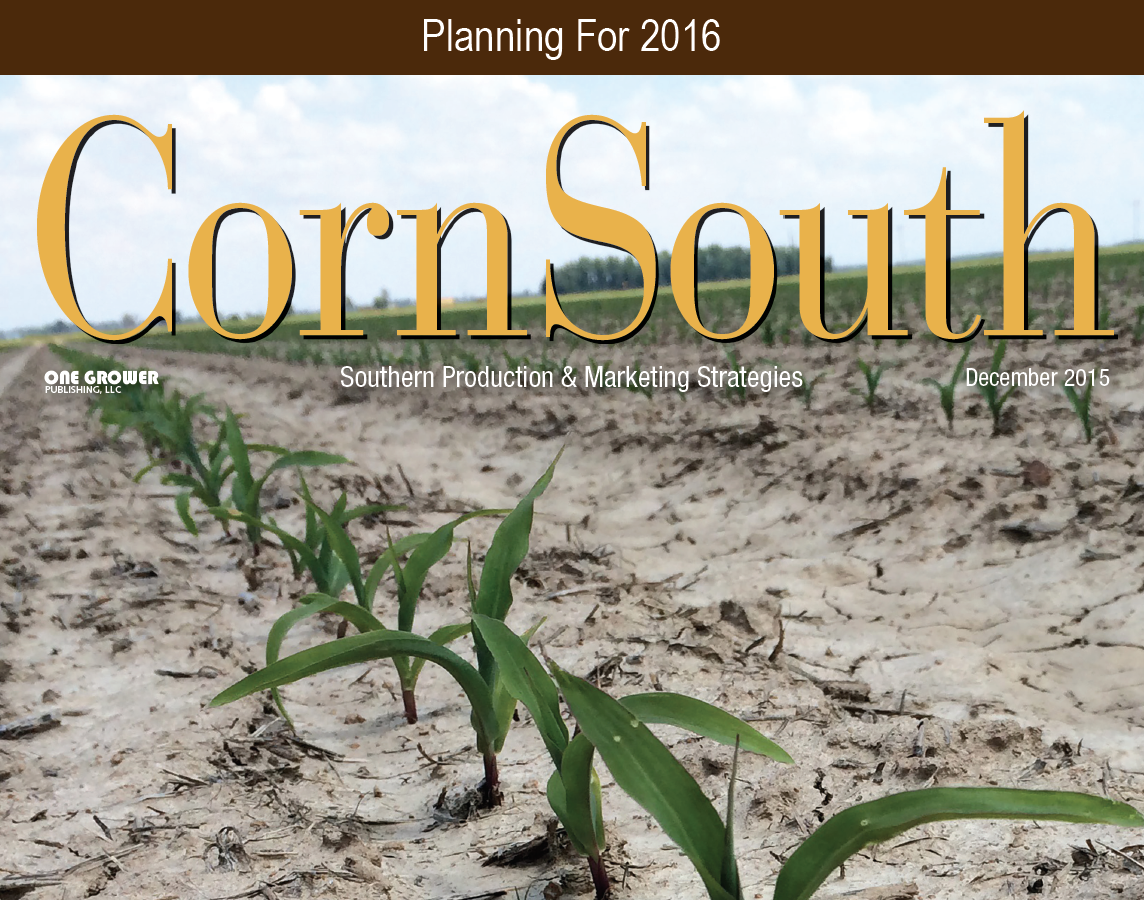 Planting date is one of the many factors that affect corn yield potential, and at times, such as in 2015, producers have little control over when they are able to get into the fields to plant. However, when conditions are favorable to plant, knowing the optimum time to produce high-yielding corn is beneficial to add into the decision-making process. Information and data on planting dates for corn from three Extension specialists follows. Planting late is probably the most common problem in Mississippi corn production. It is well established throughout the corn-producing areas of the United States that early planting produces higher yields than late planting. The standard for determining earliest planting date is when soil temperature at planting depth is maintained at 50 to 55 degrees Fahrenheit.

The primary reason to plant early is to avoid environmental stresses. Corn requires the greatest amount of water during silking. Mississippi studies indicate corn requires about 1.5 inches of water per week during the peak growing period. Rainfall is normally insufficient to meet this requirement. When rainfall is insufficient, good yields depend on water stored in the soil. This is why early plant development and the water-holding capacity of the soil are so important. Corn pollinating in late May and June will have a better moisture relationship in most years than will corn flowering in July and August.

Temperature also affects yield. High temperatures can cause death of pollen and also kernel abortion. A combination of water stress and high temperatures at pollination can be disastrous. Under these conditions, pollen shedding is accelerated and silking is delayed, resulting in ear barrenness because of contrast in development timing. Stress during grain filling results in severe competition for photosynthate between vegetative and reproductive components, leaving less for grain filling, thus greatly reducing yield. Corn growth and development are primarily dependent on temperature rather than day length. Successful germination requires a morning soil temperature of 55 degrees Fahrenheit at a two-inch depth for three consecutive days. This can range from early February in light sandy soils to mid-March on cold, wet, heavy soils. Frost may still occur after these planting dates, but corn normally withstands frost damage to above ground tissue since the growing point is still below the soil surface until corn reaches about 12 inches tall. In Florida, planting dates for corn begin in late February and proceed to late April.

When moisture is adequate, plant seed between one and two inches deep. When soil moisture is deeper than 2.5 inches, waiting for a rain or irrigating may improve stands. In cold, sandy soil, the depth may need to be closer to one to one and a half inches. Germination time and emergence will vary with moisture and temperature from five to 30 days.

Irrigated corn yields tend to be fairly consistent from February through April and then decline in May and later plantings due to insect damage and disease. However, tropical hybrids with insect-resistant genes can produce high yields into June. Non-irrigated corn may do best from late April planting, if normal rainfall occurs in July and August. Non-irrigated corn is at risk each year since dry periods of three weeks or longer occur often.

Higher grain yields are usually obtained when corn is planted as early as weather conditions permit mainly because of reduced pest pressure late in the season, better rainfall patterns and cooler air temperatures during corn silking. Start planting corn when soil temperature reaches about 55 degrees Fahrenheit at the two-inch depth in the morning and the weather forecast indicates a good chance of warm temperatures over the next few days. Soil temperature will depend on soil type and moisture content.

Light sandy soils warm up faster than heavy and wet soils. Also, planting should be delayed three to five days if planting no-till due to plant residue and higher moisture. Corn should be planted during optimum moisture to support traffic without causing soil compaction and mudding the seeds. Frost may occur following planting, but corn normally withstands frost damage to above-ground tissue since the growing point is still below the soil surface until corn reaches V5-V6 stage (about 12 inches).

For updated suggested corn planting dates for different regions in Mississippi, go to the Mississippi Crop Situation blog at http://www.mississippi-crops.com/2015/04/07.