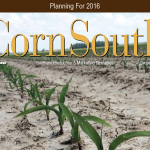 Planting date is one of the many factors that affect corn yield potential, and at times, such as in 2015, producers have little control over when they are able to get into the fields to plant. However, when conditions are favorable to plant, knowing the optimum time to produce high-yielding corn is beneficial to add into the decision-making process. Information and data on planting dates for corn from three Extension specialists follows. advantages to planting earlyErick Larson, Extension agronomist, Mississippi State University Planting late is probably the most common problem in Mississippi corn production. It is well established throughout the corn-producing areas of the United States that early planting produces higher yields than late planting. The standard for determining earliest planting date is when soil temperature at planting depth is maintained at 50 to 55 degrees Fahrenheit. The primary reason to plant early is to avoid environmental stresses. Corn requires the greatest amount of water during silking. Mississippi studies indicate corn requires about 1.5 inches of water per week during the peak growing period. Rainfall is normally insufficient to meet this requirement. When rainfall is insufficient, good yields depend on water stored in the soil. This is why early plant development and the water-holding capacity of the soil are so important. Corn pollinating in late May and June will have a better moisture relationship in most years than will corn flowering in July and August. END_OF_DOCUMENT_TOKEN_TO_BE_REPLACED 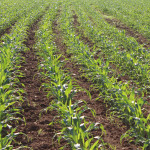 The yield estimate for the 2015 U.S. corn crop was raised to 1.3 bushels in the World Agricultural Supply and Demand Estimates (WASDE). With harvested acres unchanged, this revision boosts U.S. corn production by 99 million bushels. On the use side, a 25 million bushel increase in feed use was offset by a 75 million bushel reduction in corn for fuel and a 100 million bushel cut to exports. The net effect of these changes was ending stocks up 199 million bushels to 1.760 billion, the highest carryover since 2005/06, and an estimated average farm price of $3.65. If realized, at the end of the marketing year next August, this price would result in a five-cent Price Loss Coverage payment. The grain sorghum balance sheet was revised to show a drop in exports of 105 million bushels, but was made up in feed use up 25 million and food, seed and industrial up 85 million. The ending stock estimate of 58 million bushels is up from 42 million last month, and the stocks-to-use ratio is 10.5 percent. The season average farm price of $3.60 would earn a 35-cent PLC payment. Screen Shot 2015-11-30 at 3.00.21 PMThe world coarse grain picture changed considerably in the WASDE report, with the world corn ending stock estimate up 24 mmt or 13 percent. The estimate of days-of-use on hand at the end of the marketing year increased by 10 days to an 80-day supply. World coarse grain exports are expected to be down 190 million bushels compared to October estimates. The import estimate for China is unchanged at 118 million bushels. END_OF_DOCUMENT_TOKEN_TO_BE_REPLACED

What goes up, must come down. There’s no two ways about it, and what is coming down now and has been for a while, is farm income. For the fifth quarter in a row, farm income has declined, according to a recently published survey by the Federal Reserve Bank in St. Louis of agricultural banks, some of which were located in the Mid-South. In 2015, some crops were drowned out, and some acres were never planted at all. The result will be a reliance on crop insurance and a scaling back of spending. “The lower projected farm income will likely reduce loan demand for capital expenditures for both machinery and farmland,” said one Missouri lender about the expected continuing decline in the last quarter this year. END_OF_DOCUMENT_TOKEN_TO_BE_REPLACED 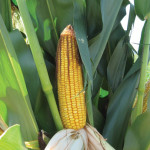 A Look at the Numbers 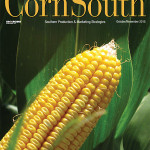 Because I am an editor, it is likely no surprise that I am not a numbers person. Adding more than a few numbers together is a challenge, and subtraction always requires a calculator. It’s sad and funny all at the same time. Thank goodness there are plenty of numbers people around, and I can appreciate the love they have for crunching those numbers, even if I don’t fully understand it. The USDA has a whole department reserved for numbers people – The National Ag Statistics Service. While looking for the crop production report today, I came across an interesting report on Internet access on U.S. farms, which I thought I would share here. USDA found that 70 percent of U.S. farms and ranches now have access to the Internet. According to the report, 43 percent of U.S. farms use computers for their business operations. Crop growers, at 47 percent, are more likely than livestock producers to use computers for business. In the livestock sector, 39 percent of producers use computers for business. END_OF_DOCUMENT_TOKEN_TO_BE_REPLACED 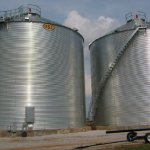 Stored grains can be heavily damaged by insects if they are not properly conditioned and protected. Small grains, including wheat, are harvested in spring and stored through the hottest and most humid months of the year. Reducing the likelihood of insect problems in stored grain begins with cleaning equipment that will be used to harvest, handle and store the grain. ... END_OF_DOCUMENT_TOKEN_TO_BE_REPLACED 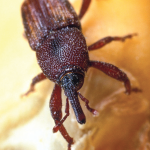 Maize weevils can destroy stored corn crops from the inside out. For Georgia corn producers, chances of an insect infestation in grain storage are much higher in late summer or early fall. A University of Georgia (UGA) entomologist says keeping corn cool and dry is the key to keeping weevils away. “The temperatures are usually warm during harvest, so we ... END_OF_DOCUMENT_TOKEN_TO_BE_REPLACED

Control Weeds Prior To Planting: Burndown Timing and Options 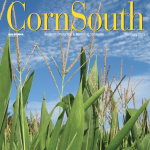 As fields begin to dry and the extended forecast predicts better conditions for weed management strategies, burndown applications will be going out. Research has shown that burndown applications need to be applied four to six weeks prior to planting to prevent physical competition between weeds and the crop as well as to reduce the chance of damage from insects such ... END_OF_DOCUMENT_TOKEN_TO_BE_REPLACED

Editor’s Note: Reports in this month’s Corn South Market Outlook are from Mark Welch, Texas AgriLife Extension economist, with Regional agronomist, Brandon A. Dillard, of the Alabama Cooperative Extension System, offering four points to help producers increase efficiency and profitability in 2015. The opinions and recommendations expressed are solely those of the authors and are intended for educational purposes only. ... END_OF_DOCUMENT_TOKEN_TO_BE_REPLACED

The Only Constant Is Change 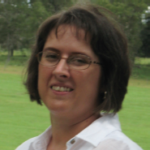 I read a quote that describes the business of farming: “It’s funny how day by day, nothing changes. But when you look back, everything is different.” Year by year, you seem to do pretty much the same thing – acreage and crops may change with rotations, weather is always a questionable factor and farm policy changes every few years. Otherwise, ... END_OF_DOCUMENT_TOKEN_TO_BE_REPLACED