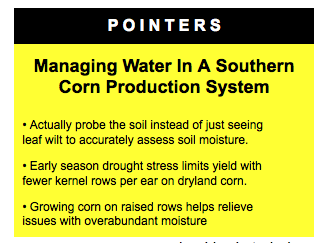 Last year, dry early season conditions prompted much conversation about the proper time to initiate irrigation for corn. This scenario usually generates a lot more anxiety than necessary because early season wilting is certainly not something we are very accustomed to.

The simple answer is that irrigation should commence whenever soil moisture becomes limiting. However, we need to do more than see leaf wilting in order to accurately assess soil moisture. The soil should be probed to actually evaluate soil moisture availability using anything from simple methods to sophisticated equipment. As occurred in 2012 as well as in past years, dramatic transition from cool to hot temperatures readily promotes corn leaf wilting during May. Since corn’s water requirement and sensitivity to stress increase with plant size during vegetative stages (from emergence until tassel), plant growth stage does play a very important role, but there is not a definitive growth stage when irrigation should commence. We can discuss ad-nauseam when ear size determination begins, but the first corn yield component determined is the number of kernel rows per ear.

Also, keep in mind that the traditionally highest irrigated corn yields in the world are produced in areas with annual rainfall well less than half our annual rainfall. A former world record corn yield producer from the Corn Belt also asserted his yields would suffer if seasonal rainfall exceeded 30 inches. Thus, corn is better suited to a lot drier conditions than what we generally think, and there surely are negative effects associated with overabundant moisture. After all, we commonly grow our row crops on raised beds to help relieve issues with overabundant moisture.

Your irrigation method can also play a big role in early irrigation. You can readily meter supplemental water with center-pivots, but don’t have much capability to do so using our predominant furrow irrigation method. Therefore, you have considerably more latitude to initiate irrigation earlier with pivots, because you can match crop needs. However, furrow irrigation is going to inherently saturate the soil, which can produce negative results, particularly for young corn and heavy clay or other soils with poor internal drainage.