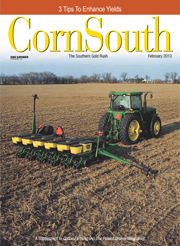 Corn growers battling tough-to-control, small-seeded broadleaf weeds and grasses will have a powerful new tool, as BASF announces the federal registration of Zidua herbicide. Future registrations for use in soybean and wheat are anticipated in early 2013. According to 10 years of research and field trials, the residual weed control provided by Zidua lasts up to two weeks longer than other herbicide currently on the market, which helps protect grower’s yield potential. Research also shows that Zidua provides up to 10 percent better performance than other residual herbicides in controlling Palmer amaranth and waterhemp.

“Zidua is a powerful stand-alone product, but it can also be used as a perfect complement to Kixor,” says Luke Bozeman, Technical Market Manager, BASF. “Growers will now be able to combine the fast, effective burndown and enhanced residual control benefits of Kixor with the residual control of Zidua for long-lasting weed control. That’s a very strong combination for keeping weeds at bay that emerge throughout the growing season, like pigweed.”

Despite drought conditions and a hurricane, 2012 was an excellent year for Louisiana farmers. Many of the state’s major commodities saw record yields and historically high prices. LSU AgCenter economist Kurt Guidry said good production practices and a lot of luck with the weather helped.

“We were relatively dry overall,” Guidry says. “But, in many cases, we got just enough rain to keep the crops growing.” Corn, soybeans, rice, cotton and grain sorghum all set yield records in 2012.

Corn farmers averaged 170 bushels per acre, 10 bushels higher than the previous record. At 44 bushels per acre, soybeans were up one bushel above the last record, which was set in 2007. Grain sorghum was at 100 bushels, up about three bushels from its former record. Cotton farmers harvested 1,025 pounds per acre. The previous record was 1,017 pounds. Yields per acre of rice were 6,500 pounds, surpassing the record set in 2011 at 6,320 pounds.

Anthem And Anthem ATZ Available In 2013

FMC announces the registration for Anthem, a new herbicide for corn that can be applied preplant, preemergence and early postemergence. It provides broad-spectrum weed control and is an excellent tool for resistance management.

Anthem ATZ also has been approved by the EPA for preplant, preemergence and early post-emergence for corn.

“Anthem ATZ has all the attributes of Anthem plus atrazine,” says Rusty Mitchell, FMC Agricultural Products regional technical sales lead. “The atrazine in Anthem ATZ helps pick up larger-seeded broadleaf weeds such as cocklebur or ragweed. One of the big advantages of these herbicides is that they have such a long residual.”

Make plans to attend the Mid-South Farm and Gin Show on March 1-2 at the Cook Convention Center in Memphis, Tenn. Pre-register for the event at www.farmandginshow.com.