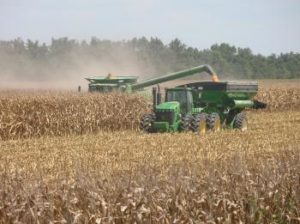 The most recent crop progress report showed no changes to the condition ratings of the U.S. corn crop. The good and excellent categories combine for 69 percent of the crop as the season winds down. The crop condition index score is 375 compared to a normal reading of 361.

October is spring planting season in the Southern Hemisphere. Corn, sorghum and soybeans are going in from Argentina and Brazil to South Africa to Australia. The GEOGLAM crop monitor for October shows planting conditions are generally favorable in Argentina for spring planting as well as southern Brazil. Dry conditions exist further north in Brazil which had an impact on the just completed summer crop harvest.

South Africa’s corn growing area is under generally favorable early season conditions. In Australia, it is dry in the east where the bulk of that country’s grain sorghum production takes place.

The report notes that if the El Niño event does materialize, above-normal rain is expected for southeastern South America. Drier than normal conditions would be expected for Southern Africa and Australia.

Export sales for the first month of the new crop marketing year continue strong for corn and weak for grain sorghum. Sales commitments for corn of 776 million bushels are 32 percent of the current USDA marketing year target. The average sales total at the end of September is 33 percent. Last week’s sales were 56 million bushels, ahead of the 34 million-bushel weekly pace needed to hit the target.

The September jobs report from the Bureau of Labor Statistics shows the unemployment rate in the United States dropping to its lowest level since the late 1960s. The jobs number (+134,000) was below expectations and below the most recent six-month average (207,000) but the size of the workforce went up (+150,000) and the numbers of unemployed went down (-270,000).

The unemployment rate was 3.7 percent, down from 3.9 percent in August.

Report revisions resulted in another 87,000 jobs added for those two months. The labor force participation rate held steady at 62.7 percent. The broader measure of unemployment, which accounts for persons working part-time but seeking full-time positions, was 7.5 percent, up from 7.4 percent last month. These are the lowest numbers since early 2000.

The seasonal price pattern for the December corn contract shows that prices have some upward momentum early in the year then drop below average about July. A moderate rebound off the seasonal low is expected this time of year.

My pre-harvest sales remain at 50 percent of anticipated production for 2018. I do not see considerable downside risk at this point and will delay making additional sales, likely now at harvest.