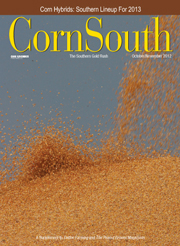 USDA revised the estimated yield for the U.S. corn crop down from 123.4 bushels per acre in August to 122.8 bushels in the September, World Agricultural Supply and Demand Estimates (WASDE) report. This is 23 percent below the trend line estimate, about the same amount the 1988 yield fell below trend. Harvested acres were left unchanged at 87.4 million, resulting in a production estimate of 10.73 billion bushels, 52 million less than last month.

However, lower feed use and exports in the 2011/2012 marketing year increased the beginning stock number for 2012/2013 by 160 million bushels. Feed use for 12/13 increased 75 million bushels, exports decreased 50 million, and ending stocks went up 83 million bushels. The stocks-to-use ratio increased from 5.8 percent last month to 6.5 percent currently.

World corn supplies also received a bump up from last year with +3.6 mmt increase in beginning stocks; production declined eight mmt, use is off five mmt, with a resulting net increase in ending stocks of 0.62 mmt. Measured by days of use on hand at the end of the marketing year, world corn supplies increased from an estimated 52-day supply in August to 53 days of corn on hand in the September estimate.

Fuel And Feed Use

On Sept. 13, export numbers showed early marketing year weakness in U.S. corn export sales. For the week of Sept. 6, sales of 8.46 million bushels were reported. This is about half of the 16.63 million weekly sales needed to reach USDA’s 2012/2013 projection of 1.25 billion bushels.

The biggest news driving commodity prices last week came from the Federal Reserve when Chairman Bernanke announced on Sept. 13 a new round of Quantitative Easing. This move is a signal by the Fed that it intends to keep interest rates low for at least the next three years (mid-2015).

The difference in this announcement of economic stimulus is the Fed’s intention to extend the program until there is substantial improvement in the outlook for the labor market.

Commodity prices in general got a boost from the move by the Fed to keep interest rates low, encouraging investors to move money into riskier investments like stocks and commodities. Grain prices gave back all those gains on Sept. 17 as traders took profits and seem less concerned about near-term supplies.

I have completed all of my pre-harvest sales for 2012. I have another 20 percent to price at harvest (early October). On a downturn in this market, I will look to start pricing 2013 grain.

At this point, the December 2013 contract has not yet broken as hard as the nearby contract.