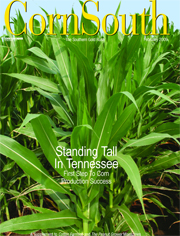 Results from a recent corn trial in Georgia comparing three nematicide fumigants and a nematicide seed treatment could have a significant impact on the corn production landscape in 2009.

Telone II soil fumigant from Dow AgroSciences demonstrated superiority in controlling nematodes in a heavily infested field. Corn treated with Telone yielded higher than the two other competing nematicides, nearly doubling the next closest treatment option in bushels per acre.

“This trial is the most dramatic we’ve seen, except maybe one,” says Dr. Bob Kemerait, University of Georgia Extension specialist. “There is a vast difference in growth, size and the uniformity of the corn. Telone is the main contributor to that difference.”

Kemerait says three factors motivated him to conduct the study: limited data on plant-parasitic nematodes’ effect in Georgia corn; an increase in corn production; and the prevailing belief that nematodes cannot cause substantial damage in corn.

Field Devastated By Sting Nematodes
Two 40-foot rows of corn, replicated five times, were planted April 4, 2008, and harvested Aug. 15. Corn treated with Telone yielded 109 bushels per acre with the next closest competitor yielding only 60 bushels per acre. The field was heavily infested with sting nematodes prior to the trial. Kemerait says sting nematodes are the most devastating type of nematode and can cause significant damage even with low populations. Southern root knot, stubby root and stunt nematodes also can damage a corn crop.

An attempt to grow soybeans in the same field the previous year failed, continuing a trend in which crops were unsuccessfully grown in the field. The presence of Telone II soil fumigant changed all of that. “Telone is the difference between having a crop and not having a crop,” Kemerait says.

“Telone really makes the corn grow up more uniform,” White says. “It didn’t stunt the corn, and it made the corn silk and tassel more uniformly.”

Would White use Telone on his corn again?

“Oh yes,” he says. “We don’t have any choice. If we farm anything, we’re going to use Telone. It’s pretty simple; if you’ve got nematodes, you need to be using Telone.”

Additional Influences Of Fumigant Revealed In UGA Trial
On top of successfully controlling nematodes in a field ravaged by them, Telone II soil fumigant exhibited numerous other benefits. Kemerait lists more robust root growth, taller plants with less stunting, better nutrient levels in the leaves and foliage, reproductive growth stages reached earlier in the season and increased yield as factors that stood out.

“This trial showed two things,” Kemerait says. “First, it showed what nematodes can take away from a corn crop. Second, it showed what Telone, in a worst-case situation, can do to aid a crop. It did a remarkable job compared with other options in managing nematodes and improving yields.”