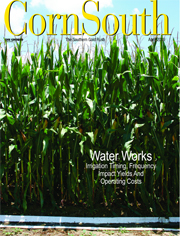 By Stephen R. Koenning, Bruce A. Fortnum and Pawel Wiatrak Toxic metabolic by-products of fungi, known as mycotoxins, have received considerable attention during the past several years. Aflatoxin, produced by the fungus Aspergillus flavus, has been considered to be the most serious problem in North and South Carolina in recent years.

The detection of aflatoxin in corn can result in a reduced price for the grain or even rejection. The maximum concentration of aflatoxin in corn for interstate trade is regulated at 20 parts per billion (ppb) by the Food and Drug Administration (FDA). Although aflatoxin production is more severe in some years, low levels (less than 20 ppb) are frequently observed even in a good year. Low levels can increase dramatically if the corn is stored improperly.

Temperatures ranging from 80 to 100 degrees F and a relative humidity of 85 percent (18 percent moisture in the grain) are optimum for fungal growth and toxin production in storage. Aspergillus flavus can grow at temperatures high enough to inhibit growth of other fungi. Take Action To Prevent Losses
Field contamination of corn can result in aflatoxin levels reaching 500 ppb or greater. Irrigation can dramatically reduce Aspergillus flavus infection of grain and aflatoxin production. Growth of these fungi does not occur below 12 to 13 percent moisture in the grain. Grain molding can occur within moisture pockets in a grain bin, making moisture control in storage essential to preventing losses. Grain sampling for aflatoxin contamination is difficult due to the localized nature of molding in storage. Take extra care to obtain a representative sample for analysis.

Aflatoxin contamination is higher in corn that has been produced under stress conditions. Thus, drought, heat, insect and fertilizer stress are all conducive to high levels of aflatoxin. Factors that influence fumonisin production in corn are not well understood at this time. Certainly, insects provide an avenue of infection for both Aspergillus and Fusarium. High rainfall and humidity at silking may increase infection of corn kernels by Fusarium spp. Hybrids genetically engineered to resist insects have been shown to have lower levels of fumonisin and aflatoxin.