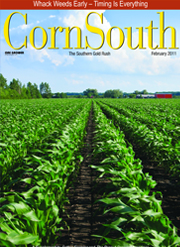 There are more than 20 common insect pests of field corn. The potential for at least one of them to cause problems makes it worthwhile to scout cornfields for insect damage to determine if control tactics are needed. Scout cornfields weekly from seedling emergence until the corn is knee-high. Thereafter, scout fields periodically until tasselling, at tasselling and during ear formation.

How To Scout Corn For Insect Pests
To scout corn, walk across the field in a zigzag or a “U” pattern. Look for any areas where there has been poor emergence, where the seedlings appear to be unhealthy (yellowed, stunted or deformed plants), where there is evidence of insect chewing or where plants appear to have been cut off at ground level.

Be sure to look for patterns in the field. For example, perhaps poor emergence occurs in a regular pattern, such as in low spots where growing conditions are poor, at the end of each row or in every eighth row. Maybe the damage occurs only on the edges of the field.

Insect damage tends to occur in patches. Use a shovel or trowel to dig in the affected area and at the margins of the patch. Look for the insects themselves or for damaged plants. When the corn is small, insects cause injury by eating out seeds, pruning roots and feeding on the growing point, causing plant death or deformation. As the plants grow, look for insects and insect damage in the leaf whorl, at the base of the leaf sheath, on the tassels, silks and the developing ear and in the stalk.

“Identifying Caterpillars in Field, Forage and Horticultural Crops,” ANR-1121, may be a useful source in helping to identify insect pests.

Insects That Feed On Seedlings
Corn insect pests can be divided into five categories related to the corn plant’s growth stage. The first category includes insects that feed on seedlings, reducing plant stand and health in the first few weeks.

Seedlings are the most easily damaged corn plant stage. Protecting them from insect feeding is important because the farmer must achieve an adequate plant population during this stage to realize full yield potential. When damage has been caused by billbugs, wireworms, sugarcane beetles or white grubs, there is little that can be done in the current year. For fields with a history of damage by these insects, plant seed treated with higher rates of insecticide seed treatment or apply a broad spectrum at-planting insecticide.

The advent of seed treatments, such as Poncho and Cruiser, have changed the way we manage early season insects. However, there is still a place for at-planting soil insecticides in fields that are at high risk from cutworms or other soil insects.

A field’s history should help determine whether to use an at-planting insecticide or a high rate of insecticide seed treatment. Rotated, conventionally tilled corn has the least problems with early season insects.

Cornfields following pasture, in non-rotated corn and in conservation tillage or no-till corn are at the greatest risk from early season soil insects.

Source: The Alabama Cooperative Extension System (Alabama A&M and Auburn universities) provided information for this article. Trade names are used only to give specific information. The Alabama Cooperative Extension System does not endorse or guarantee any product and does not recommend one product instead of another that might be similar. To view the entire Insect Pest Management section for corn, visit www.aces.edu/pubs/docs/A/ANR-0500-A/VOL1-2010/corn.pdf.