Weed Control: The Culprits Of Spring 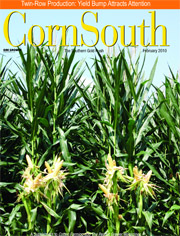 With many producers planting corn as early as March or April in the Southern states, they will soon be faced with a host of yield-robbing weeds poised to cause significant issues this season.

In the South, glyphosate-resistant horseweed can become especially problematic if not addressed in the early season with a residual herbicide.

“With corn being planted so early, if you miss horseweed in the early burndown, you’re limited on options before corn planting,” says Jason Bond, Mississippi State University weed scientist.

“Valor is an excellent residual horseweed material,” Bond says. “It is often used in early burndown programs (late January to mid-February) for residual horseweed control. And, in minimum-tillage corn with high residue, Valor may be applied up to 14 days prior to planting.”

If growers are forced to make an in-crop application against horseweed, Bond recommends a combination of dicamba and glyphosate.

Palmer Amaranth, Italian Ryegrass
Both Bond and Alan York, professor emeritus at North Carolina State University, have struggled alongside growers in their areas to combat the pervasive glyphosate-resistant Palmer amaranth in corn and other crops.

“It’s such a major issue that Palmer ends up driving a lot of the weed management decisions farmers are making,” York says. “The good thing about corn in a rotation is that we have the tools to control Palmer well in corn, and that should help in working down that seed bank.”

For both conventional and Roundup Ready corn, York recommends a mixture of pre-emergence herbicides, such as s-metolachlor plus atrazine. In most cases, a postemergence treatment will also be needed. In addition to the old standard herbicides, such as 2,4-D, dicamba and atrazine, newer products such as Callisto, Laudis and Impact will also control Palmer amaranth.

Bond adds that products like Callisto or Impact are in a relatively new class of chemistry that are not used in soybeans or cotton. This is important in helping to break up the modes of action and, in turn, also helps with resistance management.

A newer glyphosate-resistant weed causing issues in Southern corn is Italian ryegrass. Bond said ryegrass can come up in the fall and overwinter, causing major headaches in the spring. Bond recommended that farmers with ryegrass present at the time of planting apply Gramoxone Inteon at four pints per acre.

The Importance Of A Pre-Emerge Residual
Regardless of the weed, more experts are agreeing that pre-emergence herbicides with long residual control are central to any good weed management program.

“Whether you are planting Roundup Ready crops or not, a pre-emergence herbicide just makes good agronomic sense,” York says.

“By controlling that early flush of weeds, you eliminate the early competition that can occur if the postemergence is not timely and thus protect your yield potential. Even though you may kill the weeds later, you cannot recover lost yield potential. A good pre-emergence program can buy you flexibility in timing of the post treatment. And, you introduce one or more different modes of action with a pre- treatment, which helps in resistance management.”

Bond adds, “Several growers had to change crop plans at the last minute last year. And especially for some fall burndown herbicides, you can get locked in to a specific crop for the following year, so it pays to think ahead to what crops you may shift to and make sure the product you are using doesn’t have a plant back restriction on that alternative crop.”

Archer Malmo, who represents Valent, contributed information to this article.