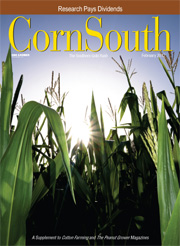 After the investments in land and equipment, two of the largest costs that corn farmers have each year are fertilizer and seed. That’s where Rick Mascagni’s research benefits Louisiana corn growers. Mascagni, a researcher at the LSU AgCenter’s Northeast Research Station in St. Joseph, conducts trials with nitrogen fertilizer on corn and coordinates the AgCenter’s statewide corn hybrid testing program.

“Nitrogen moves through the soil, and soil moisture affects both the mobility and plant uptake of nitrogen,” Mascagni says. “Nitrogen may be lost to processes such as leaching, denitrification and volitization. It is by nature a gas and volatizes.”

To help farmers manage their nitrogen fertilizer use, Mascagni has been evaluating a hybrid of treatment options, such as fertilizer rates at different times of application. So instead of applying all the nitrogen at planting time, he is trying what’s called “split or supplemental applications” by applying only part of the nitrogen at planting and the rest later in the growing season.

Mascagni notes that Louisiana corn producers generally wait until the corn crop is up to a good stand before they apply nitrogen. By splitting the application and waiting later in the season, they can match their fertilizer needs to their expected yield based on how the crop looks as it’s growing.

“We can’t predict the weather, so the next best thing is in-season modification,” he says. “A grower can use a base rate and modify his program later depending on how the season plays out. The bottom line is, a corn crop can recover from a partial yield loss with late fertilizer.”

The recommended rate of nitrogen fertilizer for an average corn crop is 160 to 240 pounds per acre, depending on the soil type and the yield potential. Mascagni conducts his research on both silt loam and clay alluvial soils.

Rather than applying all the nitrogen at planting, Mascagni applies 120 to 180 pounds at planting, depending on the yield potential of the soil and hybrid, and the rest later. The first application is made when the corn is at about the two-leaf growth stage. Subsequent applications are being evaluated at the 12-leaf and early silk growth stages. “We’re looking to improve fertilizer efficiency,” he says. “But our research has to be long-term because every year is affected by weather, particularly rain and temperature. Some years we have good potential, other years, we don’t. You can’t look at one year to make practical decisions.”

Rick Mascagni is a corn researcher with the LSU AgCenter. Contact Mascagni at (318) 766-3769 or hmascagni@agcenter.lsu.edu.

In addition to corn fertility research, Rick Mascagni also coordinates the corn hybrid testing program throughout Louisiana. Seed corn companies supply the seed, and LSU AgCenter researchers manage the crop from planting to harvest. The AgCenter conducts trials at research stations in Winnsboro, Shreveport, Alexandria and St. Joseph with an average of 80 evaluated each year at an entry fee of $500 per hybrid.

“Companies are looking at yield stability – how a particular hybrid performs over the years and locations,” Mascagni says.

The geographic locations provide information on how different hybrids perform under different conditions. In each trial, hybrids are planted and managed according to AgCenter recommendations.

The researchers measure yield, the date when 50 percent of the plants are producing silks, plant height, ear height and husk coverage. Loose husks can be a problem, producing conditions that are conducive to the development of aflatoxin, a byproduct of a fungal infection that generally occurs in drought-stressed corn.

Although everyone wants to plant a “super” hybrid, that isn’t necessarily what growers should consider.

“The ‘good’ hybrids may not be the top yielder in good years,” Mascagni says, “but in poor years, they still perform well.”