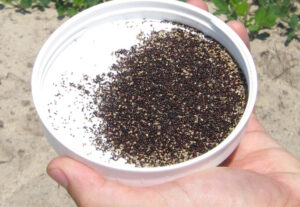 Weeds are the bane of most growers’ existence. In a growing class of “superweeds,” Palmer amaranth continues to frustrate farmers with its dogged resistance to commonly used herbicides.

Research has shown that left unchecked Palmer amaranth can reduce corn yield by 91%. Different chemistries have been brought to market and enjoyed some control against the weed, yet many are no match once it develops resistance. Now, Palmer amaranth is resistant to eight modes of action. Herbicide-resistant weeds cost U.S. producers an estimated $2 billion per year.

A possible solution may be an underused mode of action. Pyridate is a Weed Science Society of America Group 6 herbicide that works by blocking a weed’s ability to photosynthesize in the photosystem II process.

It triggers the release of toxic forms of oxygen and causes rapid cell wall degradation. When combined with other classes of herbicides as part of an integrated weed management program, post emergence control of actively growing broadleaf weeds is increased.

Bring Back A Proven Solution

One example is the synergistic combination of pyridate with HPPD-inhibitor herbicides, like mesotrione. Pyridate increases the amount of toxic oxygen produced within the weed, while HPPD inhibitors reduce a weed’s ability to process the toxic oxygen, ultimately resulting in rapid weed death.

Another effective solution combines pyridate with atrazine, another photosystem II inhibitor. While both are from the same class of chemistry, Pyridate is a contact herbicide, while atrazine is systemic. Together, this tankmix leads to rapid weed death.

In University of Arkansas field trials of glyphosate-resistant Palmer amaranth, a tankmix of glyphosate, mesotrione and pyridate offered a 20% increase in control of the weed in corn. The same tankmix applied to HPPD-resistant common waterhemp resulted in 95% weed control nine days after application, according to research at Iowa State University.

As growers continue to look for long-term sustainable options that still provide robust weed control, using more of the same isn’t the solution, especially against superweeds. By incorporating a proven product with an underused mode of action, such as pyridate, in their tankmix, growers have an opportunity to regain control of their fields.

Article by Tom Wood, general manager of Belchim Crop Protection USA. He can be reached at tom.wood@belchim.com.