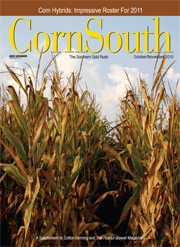 Usually, in the last two weeks of December, it’s inevitable that commentators will dedicate at least one segment of their television or radio shows to discuss some of the highlights of the year that’s about to draw to a close. Just for fun, and in no particular order, let’s take a quick look back at a cross section of events that occurred in 2007.

2. Carrie Underwood belts out “Before He Cheats,” which quickly becomes a top hit and popular cell phone ring tone.

3. The Dow Jones Industrial Average closes at an all-time high on Oct. 9.

4. The Indianapolis Colts, led by quarterback Peyton Manning, beat the Chicago Bears in the Superbowl, 29-17.

5. The 110th United States Congress convenes, electing Nancy Pelosi as the first female Speaker of the House in U.S. history.

6. Comet McNaught is the brightest comet that anyone has seen in 40 years.

7. Oceans Thirteen and Rush Hour 3 are popular draws at movie theatres across the country.

On the agricultural front in 2007, corn prices shot up, and the “Southern Gold Rush” was officially underway as Southern corn acres increased from 1,920,000 acres in 2006 to 4,035,000 acres in 2007. It seemed as though everybody and their mama across the South was planting corn.

The learning curve was somewhat steep for many Southern farmers who had grown only a little corn in the past or no corn at all. Challenges included finding hybrids that fit our Southern climate and figuring out how best to implement agronomic practices, such as fertility and weed and insect pest control, to make this crop work on Southern soils.

Although Southern corn acres have declined since 2007, industry has more than stepped up to the plate to provide hybrids that perform extremely well in the South and tweak pest control products to fit our pest spectrum. And farmers are realizing the benefits of rotating corn with cotton or peanuts and not putting all of their seeds in one basket, so to speak. Yes, the fast and the furious fly-by-the-seat-of-our pants 2007 Southern corn-growing season is in the past. But, the management tools we’ve acquired and the products now being offered will serve us well in the future as growing corn in the South continues to shine.
If you have comments, send them to Corn South, 5118 Park Ave., Suite 111, Memphis, Tenn., 38117. You may also call (800) 888-9784 or contact Lia Guthrie at lguthrie@onegrower.com or Carroll Smith at csmith@onegrower.com.